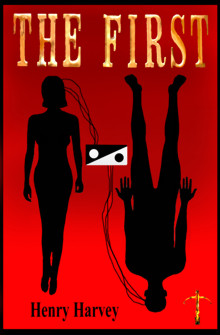 When CHRISTOPHER KNOWLES awakens in a hospital to discover that his body has been crushed in an accident, his surgeon, DR. BENJAMIN MANNSTEIN explains that without all of the life support systems, he’s as good as dead. Mannstein’s colleague, KEVIN GERTZ, has been experimenting with a micro-chip device he’s invented at Johns Hopkins. It’s called the Gertz Router and it enables a surgeon to sever the spinal cord of one patient and patch it electronically to the brain stem of a different patient. The router shows promise but the donor they find is a brain-dead teenage…girl. The surgery, while successful, is just the beginning of their problems. Chris’s wife, JENNY, can’t stomach the prospect of being married to a young pretty girl and Chris himself can’t handle the prospect of no longer being a man.

On their way home from the hospital, their daughter, MEREDITH, calls. A ring-of-fire is surrounding the house. THE SHEPHERDS OF GOD, a right-wing terrorist group threatens the wrath of God if Chris doesn’t return the brain (and soul) to its rightful owner.