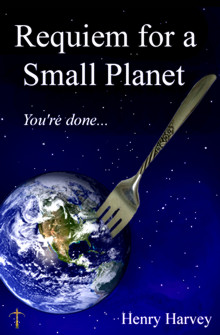 Requiem for a
Small Planet
$15.95
eBook only $1.99
The storm drifted in from the west, drenching Pittsburgh. By three-thirty it passed over Morristown, New Jersey, and awakened Ed Calico in his second-floor apartment. He shut the bedroom windows and drifted back to sleep. It was then, that he had the dream.

He was at the top of a skyscraper in Manhattan, staring out the window when the mile-high mountain of water approached. It was sickening. Every building slowly succumbed, and just as the floor began to tilt and crumble, he noticed a robed figure out on the ledge, staring at him.

The following morning on coffee break from his carpentry job in a new duplex, he tells his buddy about the dream. But then he sees the robed figure on his balcony, tapping at the door to come in…and it wasn’t a dream, nor was the mountain of water. It was just the prelude.

It seems that the Creator of this small blue marble that we call Earth, is displeased with the way things have turned out. The question is whether to just tear it all down and start anew, or is there something of merit still left for reclamation?

For reasons hugely unknown to Ed Calico, he has been chosen as the last advocate, to make a plea for Earth. And there isn’t just one robed figure, but twelve…and they are not what you think.

This is vintage Harvey. You will never know from one page till the next where the odyssey is taking you. Settle in, pour a glass of something, and let your mind escape to a strange encounter.