Playing on the Black Keys, a novel by H.R. Harvey 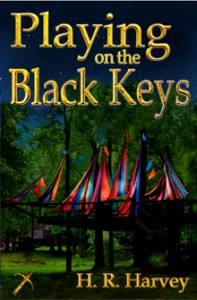 In the animal kingdom, fathers sometimes eat their children, much to the chagrin of the mothers. When Sam and Delta Harper, who run a small-town newspaper, suffer the return of Peter, their bug-up-the-ass son from college, eating him isn’t really an option. But the triangle of mom-in-the-middle between father and son is a tenuous one.

To make matters worse, Sam discovers he has a tumor behind his eye and assumes he is going to die. Delta, his Christian Scientist wife, believes it’s all in his head, figuratively, not literally. When Peter declares at the dinner table that he wants to be an attorney, a corporate attorney, no less, Sam and Delta wonder where they went wrong. Strangely, it’s Peter who ultimately creates a life-threatening show-down between himself and his father in the skies above Carver’s Mill.