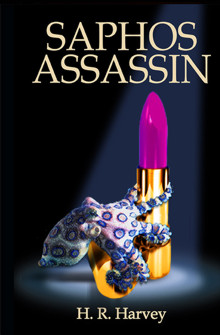 In Saphos Assassin, the setting is Key West, Florida. The action spans one week, during which time, all of the television news anchors have arrived to cover the anniversary of the Cuban Missile Crisis. One-by-one the anchors are being murdered on the air during prime time. It’s impossible to trace or to stop.

Sylka Gertz, a young Lolita-type, beautiful, but criminally insane, has been undergoing toxin desensitization treatments by her stepfather, Malcolm, using the poisons of the blue-ringed octopus, cone snail, and black mamba, to create the most lethal concoctions on the planet. Their purpose: to enable her to wear highly poisonous makeup, lipstick, and lotion so she can kill with just a kiss or the scratch of her fingernail. Her transformation, however, is unpredictable and goes awry. Her blood and saliva, her touch, even her tears are now lethal. She can kill slowly with excruciating pain, or in a single heartbeat.