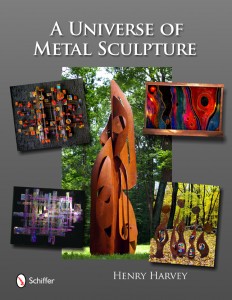 Excerpted from A Universe of Metal Sculpture

Lynn: If it’s all right with you, I’d like to dispense with the usual interview questions, or at least get them out of the way.

Lynn: Well, I think that covers ninety percent of what I was going to ask. Tell me: why do you sculpt?

HH: Three reasons: First, I love to do it. Second, I seem to have a facility for it. Third, I’d like to be remembered.

HH: By everyone. By every girl I ever dated. Friends, enemies, in-laws, out-laws. Everyone. I think that is secretly everyone’s dream or desire…to be remembered, to be eternal in some small way.

Lynn: Fair enough. Is there any single part of the creative process that excites you the most?

HH: It’s not a part so much as a zone you get in. It occurs when a new idea comes into your mind and you begin to grapple with it. The feeling is akin to infatuation. You can’t wait to think about it, work on it, solve it.

Lynn: And when it’s solved, what happens?

HH: The feeling starts to subside. It’s not unlike sex. There’s a definite arc to the whole thing. Perhaps that is why it has been so addictive and so much fun over the years. I still love to write…sculpt.

Lynn: But there’s always a down side?

HH: Hmmm, yes. Always. It’s the Zen paradox. Whatever is good is going to cost you something, either sooner or later. It may be intangible or completely oblique, but it’s always there. It’s best to know what the costs are.

Lynn: Do you have a favorite metal?

HH: If dogs were metal, steel would be a German Shepherd, strong, hard, powerful, and potentially lethal if not handled correctly. Copper would be an old sheepdog or maybe a basset hound. It just wants to please. Brass is like a dachshund. It can be great, but often unforgiving. Stainless: There isn’t much of anything I personally like about stainless so I wouldn’t equate it to a dog. It’s hard to work, hard to weld. It’s…just plain hard and for my tastes it looks cold, as if it would rather have been a refrigerator. But remember…that’s just me.

Lynn: Who are some of your influences?

HH: Are we talking just about sculpting?

HH: Okay, from a sculpting standpoint, I loved Sandy Calder’s attitude. Big kid, didn’t seem to take himself all that seriously. Wanted to reinvent the world. That about sums me up…put it on my grave stone. Also, Henry Moore. I imprinted a lot on his fluidity in some of my pieces…plus putting holes in things. David Smith gave me freedom. On the painting side, my heart warms when I see a Monet. And on the flip side: Photo realism… Why bother? Take a photograph. It just seems like misdirected pomposity. On the writing side, I go back to the classics: For the first five years, I was a Steinbeck wannabe. E.B. White wrote a perfect book in Charlotte’s Web, and Sam Clemens has that dry sardonic wit that I love. He’s still fresh today. On the business side and there are few business men I hold in high esteem: Richard Branson is an exception. He tells the truth even when it puts him in a bad light. He fights tough, but admits his mistakes. Courageous and a free-thinker. I would have liked to have shown him how to sculpt…see what he would come up with.

Lynn: Do you ever run across some of your early sculptures…and if so, how do you react?

HH: I have, and the answer is: it depends. There are a few that I actually didn’t recognize. I’ve sculpted a lot. A few are like old friends. With a few I think, “Man, that’s not bad!” and then there are a few that made me close my eyes, grit my teeth, and groan. I guess I’m all over the dartboard on that one.

Lynn: You have written almost as much as you have sculpted. Which is more difficult?

HH: The quick answer is: Writing…hands down. There’s no comparison. With writing, you may take a year, two years, and not know until the final chapter whether it’s going to fly or not. In one way, writing a novel is like opening a vein and letting the blood pour out on the page…day in, day out. And yet at the same time, there has to be spontaneity, a light touch, attention to dialogue, sub plots, the arc of the climax, avoiding the predictable. It goes on and on. And writing unlike a sculpture is not a snapshot of one moment in time, but an entire universe you must create…and allow to play-out in time.

Lynn: Do you have many scars as a result of the sculpting?

HH: If you mean physical, I have a few, but mostly minor…mostly burns. It’s easy to lose track of what’s hot and what isn’t.

Lynn: Actually, I wasn’t referring to the physical.

HH: Okay. Then the answer would be yes, I have some minor ones. Much deeper scars when you write.

Lynn: It has been brought to my attention that not all of your sculptures are signed. Are you making some sort of statement?

HH: Usually it’s just an oversight. I get busy or just plain forget. Sometimes, when I have taken a commission and have had my arm twisted behind my back to the breaking point, I will make the requested change. But then I will sign it with a single H, instead of the usual HRH.

Lynn: I know there’s a thing called, writer’s block. Is there something similar in sculpting? Sculptor’s block?

HH: I think writer’s block is a misnomer. It’s what happens when you start writing a book prematurely and don’t really know where you’re going. Or…it occurs when an inexperienced writer doesn’t know what the hell he’s doing. Same thing with sculpting. With experience, this phenomenon fades from the lexicon.

Lynn: Considering where you are in the world, what are your dreams now, compared to when you were beginning?

HH: Funny you should ask that. In a writing seminar in Bucks County a few years ago I asked Joyce Carol Oates the same question. She had been buzzing along frenetically and the question seemed to cold-cock her. I never did get a straight answer and I thought that was interesting in itself. I think as one matures, the dreams change. I remember vividly out in Tucson, driving out into the desert to watch the sun go down and thinking, if I could only keep sculpting the rest of my life, I’d be happy. That was the dream.

HH: Same dream. Awards, accolades, kind words, harsh words… It gets to a point where they have little or no effect. You sculpt to please yourself…and hope others will enjoy it. But a month on the New York Times bestsellers list…now that would be fun. At least I think it would.

Lynn: Penultimate question: Assuming there’s a heaven, what would you ask God at the pearly gates?

HH: Where have you been? On sabbatical? The place is going to hell down there. We’re in trouble and we’re out of time. We need help.

Lynn: Last question: What thing or things, have served to get you through the hard parts?

HH: Not a thing but a person: my wife, Pamela. The sun still rises and sets on her opinion of me. Oh, and one last thing that keeps me on track. The proverbial “Let’s give it the good ole college try” or in today’s parlance, “I’ll give it a shot.” Terrible attitude. If you aren’t willing to clamp down on your dream and hold on for dear life till you win…don’t bother. There’s a long line of others who are standing in line and eager to jump at the chance.