When you go to a cocktail party, dinner, or just meet some new potential friends, the first thing the guys do is try to establish a pecking order.  Who’s the alpha male?  Who makes more money…stuff like that.  Doctors and CEOs assume they’re going to win every time, and when you say you’re a sculptor or artist, or writer, they assume you’re living in a cold-water flat or some apartment tucked away in some shady neighborhood. 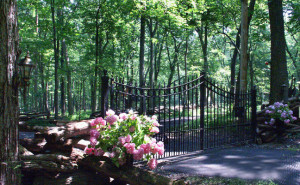 Entrance to CrossBow, our last residence in Bucks County, PA

Case in point:  We’d been commissioned by a husband-wife team of two plastic surgeons in Philadelphia.  They were very nice on the phone, but when they came to pick up their sculpture, they had to call and get buzzed-through wrought-iron gates and then drive another eighth of a mile up to the house.  By the time they got there, the husband was as furious as he was blunt.  “Why the hell do you have a better house than I do?”  I felt as if I was supposed to apologize.

Having faced this many times over the years,  we came up with an explanation which you might find interesting, possibly even helpful.  The glitch occurs the moment you ask a stranger if they are an artist, or…better yet, whether they are creative.   Men, and to a degree, women, will adopt a sly smile.  They’ll say, “Nope.  Don’t paint pictures.  Don’t make sculptures outta tin cans.  I’m the branch manager of  ABC company,” or “I’m the division head of XYZ industries Inc.  I don’t have time to play in the sandbox.”   Some are a bit more subtle, but that’s the gist of the response. 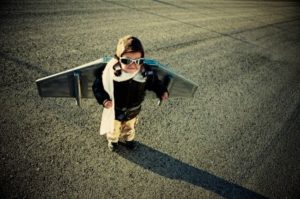 Is it their fault?  Not at all.  90% of the education systems in the world set out methodically to quash the creative part of children and reward the children who can most quickly fit into the mold of grown-up-ness.   Memorize your quadratic formula, your times tables.  Learn to diagram your sentences (a sore point for me having published many books) and generally just dismiss those thoughts that don’t mesh with the established ways of doing things.

A Brief Sidebar:  Most of you know about TED LECTURES.  They’re free.  All you have to do is type in TED Lectures and an incredible world of 18-minute lectures opens up to you.  The Best.  If you haven’t tried them, they’re worth their weight in gold. 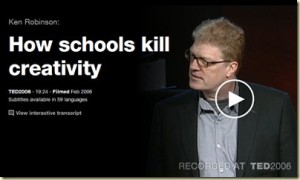 And of those lectures, is one given by Sir Ken Robinson…about how educational systems kill creativity.  Sound dry?  Well, you’d be wrong.  If you do nothing else today, gamble 10 minutes and try out Sir Ken.  Caveat:  Ken usually uses the first five minutes to warm up the audience.

And…if you’re one of that segment, who just won’t tap on a link, no matter how good it is, I’ll give you my drastically shorter version.   The thing that separates the vast hoards of people in the telephone book, from the people you’ve heard of are separated by one thing: CREATIVITY  in SOLVING a PROBLEM.

Stephen King:  What If??? the anthem of the creative child.

Thomas Edison,  The Wright Brothers, Picasso, Alexander Graham Bell, Lincoln, Jefferson, Franklin, Washington, and on and on for fifty pages…a hundred pages.   There isn’t one member of this group who just kept his head down and went by the rule book.  And that spreads into the world of medicine, law and the fine creative art of handling PEOPLE.

THERE IS NO PLACE WHERE CREATIVITY HAS NO PLACE.  (Just came up with that one!)

But…What About at Home???  The what-if concept applies there, too.  Are you a meat-and-potatoes kinda guy?  There are fifty average things in your kitchen to experiment with and make mind-blowing steaks, salads, lasagnas, soups, drinks, desserts you never even tried.  I personally make a topping for ice cream that’s mind-blowing.  Pam has fifty tricks and secrets.

In the Bedroom:   Familiarity is the killer of  Passion.  And there are fifty + books to help you out with this one.

Every room in your house, bathroom and closets included, and every  square foot of your outdoors is open to reinterpretation.  Once you start taking the plunge, it’s addictive. 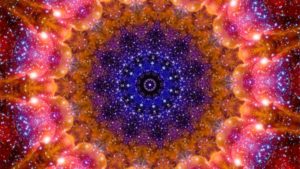 What If ???  A few weeks ago, I had a slightly different What-If Moment.  In this particular case, I was just daydreaming and the concept of kaleidoscopes trundled into my mind.  You know, those cardboard tubes you got as a stocking present for Christmas.  You peered into them and fifteen or twenty colored-glass crystals and widgets tumbled in a little chamber, creating magical patterns.

Then the What-If Fairy, parachuted down into my brain and I began wondering, “What’s the world’s biggest kaleidoscope?  What’s the most complicated?  Are there electric ones?  How would that work?  Do they make one that you could stick your whole head into?  Are there LASER kaleidoscopes?  Underwater?”  Soon the ideas just began flooding out.

This time, however, I had a thought:  The potential here is so massive that one could spend the rest of their life, just trying to actualize all the possibilities.  I contacted a number of fellow friends and artists in the teenie weenie town of Old Fort, North Carolina, and we had a meeting.  Then another and things have caught fire.

I have no doubt whatsoever that our little group, ARTISTS OF THE ROUND TABLE, will have not one or two, but a whole handful of world-firsts, possibly Guinness Book Firsts within the year.   How did this all start?  Somebody daydreaming, pipe-dreaming…watching clouds drift by, looking at the ripples in a stream or just taking a sip from a Dos Equis bottle.  Anything can trigger the magic.  BTW, one of our members is an attorney and…yes…the design copyrights are already in the works.

If you’re the middle manager of people and you still think that creativity has no place in managing…guess again.   If you sell stuff for a living…shoes, insurance, tacos, houses…..  If you’re successful at what you do, you’re already into the creativity concept.

Creativity is what separates the okay from the inspired.

A Non- Sequitur…sort of.  Got an e-mail last night from a Facebook friend who was tracking down one of my books on Amazon, and came upon this link.  In truth, I’d never really concerned myself with how Amazon sells my stuff and I was pretty surprised at the extent of it.  If you’ve read a book or two of mine, here’s pretty much all you need to know.  And, I have no idea how they did it, but they linked-in the biography, plus about 4 months of my weekly essays and blogs.  Curious to know if you’ve seen it before. 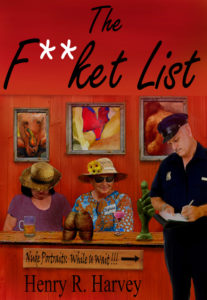