I’ve received an interestingly large amount of e-mails asking 1.  if I was okay…still alive…still had the use of my fingers.  And one good friend (Pam Farrior) who shall remain anonymous asking if I’d run out of ideas….to which I replied, “For shame!” with a smiley face. 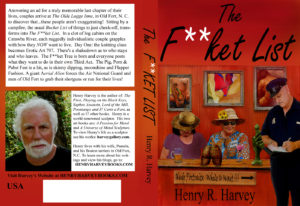 The truth of the matter is slightly different.  I’ve been trying to do a whole lot of things all at the same time, and…quite frankly, something always suffers when you do that.  At some point, that little voice I call my Muse, whispered, “Hey, didn’t you used to write books?”  That was my wake-up call, and for the past month or two I’ve been “bringing on home” two novels which I’ve been working on for several years now.

The first one you may already know about.  It’s entitled The F**ket List and will be coming out very, very shortly.  Here’s a shot of the cover, and if you blow it up to full-size, it gives a reasonable plot synopsis. 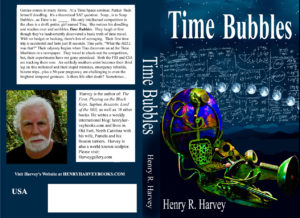 The second one,  TIME BUBBLES which I’m just this week finishing up, has been in the works for several years now.  Like the above novel, this one is also set in North Carolina and, in fact, this very house, although precious little time is spent there (here)….mainly because it’s a book involving a time machine, though unlike any movie or book I’ve read before.

First off, unlike 99% of the time travel books, this one addresses the actual theories, and facts, questions and hypotheses of time travel.  You can thank, Einstein (a bit), Richard Swinburne (a bit) but Richard Feynman a whole lot.  H.G. Wells wrote a great book, but the part involving the time machine was pretty slim.  Sit down on fine leather seat, pull highly polished brass lever.  Something spins and…AWAY YOU GO!!!

The characters in this story have attitudes, make huge mistakes, get lost, lose machines, get arrested, chased, threatened, and attacked by things called Entelodons which actually existed..way back when. 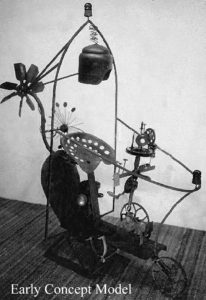 Some of the chapters include actual Time Machines I’ve created and sold, though these ones travel a bit slower than the ones on the book…an hour for an hour.

Truly new concepts are seriously addressed, which I honestly haven’t heard discussed before.  The really difficult part was addressing a highly sophisticated and difficult to understand concept of (take a breath)  Quantum Entanglement as a Rudimentary means of communicating across large spans of Time.   It’s not boring, and not terribly hard to figure out. 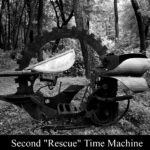 And one cagey character named Wayne is hugely interested in the possibility of going back in time and ferrying fine old Jags, Mercedes and Ferraris from 50 years ago to the present, where they cost about twenty times as much.  Is it possible?  Maybe.

Can you die and still survive?  With a time machine….Maybe 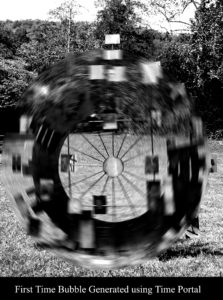 Can you have a 50-year gestation period for the baby you conceived, while on a brief time jaunt?  Unabashedly yes, though it’s complicated.

Has my Muse bombarded me with any viable concepts that could be created right now…today?  The answer is: YES

Soooo, I’ve been away doing what I do and having a helluva time doing it.  Any regrets?  I’ve missed communicating with you kind folks, but I think we’ll live.

Right now, it’s still COLD as hell down here in Old Fort, N.C.  But, no complaints.  Millions have it worse. 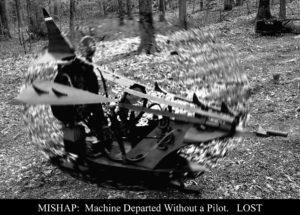 Oh….  The only rule of writing that’s written in stone is:  Spin a good yarn.  Don’t be boring.  I can guarantee you of that.

P.S.  Inspired by the concepts in this book, we’re now setting up to build a new and very, very different kind of time machine, one which matches the concepts in the book…blows HUGE “Time” Bubbles, has electronic, kaleidoscopic view scope…and seats three.