Ask the Characters – How It Works

Imagine for a moment:  You just slipped down onto your old familiar bar stool, you order the usual, pop a peanut in your mouth and then…you glance over and notice that Hannibal Lecter…or Lolita, or Rhett Butler has slid onto the bar stool next to you.  What question would you like to ask them?   In the tiny world you are in right now, you can ask ANY character ANY question from ANY of the 17 books on THIS website.   Wouldn’t be fair for me to be second-guessing Margaret Mitchell about ole Rhett, but any of my characters are fair game.  There are only two rules and they’re pretty fair.

First:   Address the character, not the author.

Second:  Accord the character you’ve chosen to question the same courtesy you would of someone you might meet at a dinner party.  Ready?

Reader’s Question (Tom K.):  I’m addressing this to Sam Harper, the irascible small-town editor of the Patriot Newspaper in the book, Playing on the Black Keys.  With all due respect, Mr. Harper, you seem like a kind of a short, dumpy, pain-in-the ass throughout  most of the book.  How did you manage to snag Delta, who is obviously taller, prettier, probably smarter, friendlier…well you get the idea. 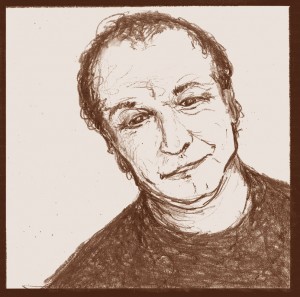 Sam Harper:  “Jesus Christ, this is how you’d treat someone at a dinner party?  I’m never going to your house.  But to answer your question…” 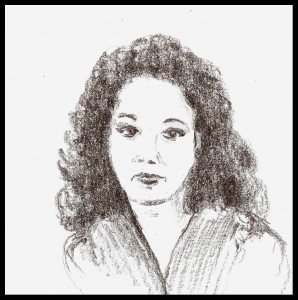 Delta (interrupting)  “If you don’t mind, I think it’s appropriate if I answer this question.  Is Sam shorter?  Yes, he is.  Am I smarter?  Of course.  Am I better-looking?  I think most people would say so.”

Sam Harper:  “I thought you were coming to my defense.”

Delta (smiling)  “The answer to your question is this.  When you are around Sam, it is never boring.  I have no idea what’s going to happen next and I like that.  The fact that I’m superior in every way, allows me to use my maternal and nurturing instincts.”

Aaron T.:  Uhmmm, this is for Delta:  “You seem to like martinis…

Delta:  “That’s your question?  You read the whole book which delves into  Zen and hometown philosophy, flying, the pros and cons of euthanasia and that’s the best you could come up with?” (Delta takes a moment.) Yes, all right.  Fine.  In martinis…veritas.  I keep my vodka and my glasses in the freezer, my vermouth in the fridge and there’s none of that shaking them with ice bullshit which dilutes them.  My martinis will kill lesser people.”

Sam (pauses).  “You’re a smart-ass aren’t ya?  But, okay, let me give it a shot.  Did you ever see the old sci-fi movie, Forbidden Planet? It’s good, one of my favorites.  Anyway… there’s this robot on the planet that the mad Dr. Morbius has created.  It’s a powerful and sophisticated robot, but at the end of the movie when Morbius commands the robot to kill the invisible monster that’s killing everyone…he can’t…and the reason he can’t is that he knows deep inside his little robot brain, that the monster is really a monster generated from Morbius’s mind…his id.  Because of this, he sort of goes tilt and starts smoking.  His circuits are frying.

“…Having said that, there are, indeed, serious honest to goodness moments when the big boss puts words in my mouth or makes me do something that’s bullshit…and I just won’t do it.  I kinda go on strike…and the boss can’t write when I know he’s writing bullshit.  It’s my one little control. Does that make any sense to ya?”

Paula R:  This question is for Esmeralda Quist in the novel, Lord of the Mill.  Ms. Quist,   we are led to believe that you are some kind of demi-witch in the beginning of this book, but then, later on it seems like you’re just a really weird woman who sells really really weird pastries.  Could you tell me what your background is?  People don’t just spontaneously start baking croissants with beetle wings and spider webs…at least I hope they don’t. 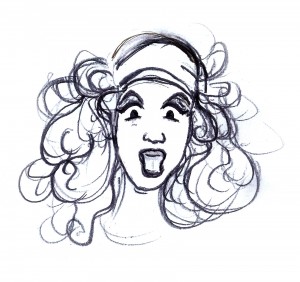 Esmeralda Quist:  (chuckling quietly)   …hee, hee, hee.  Yes, if you haven’t tried one, I suppose it doesn’t sound very appetizing.  But then if you think about caviar or where pate comes from…or where eggs come out of, a lot of it is in your mind.  But, you’re right, my dear.  They say the nut doesn’t fall too far from the tree.  You can thank Mommy Dearest for that.  Would you like to see a photo of her?  Well, you can’t.  It’s a trick question.  Real witches, like real vampires don’t photograph very well. …hee, hee, hee

Rodgers G:     This question is for Ed, the Rastafarian in the…(do I even call it a novel?) weird philosophy novel entitled:  Pissing in the Wind.  You appear to have some sort of inroad to truths not known to many others in the world.  I am particularly interested in your premise of such a multiplicity of dimensions.  Did it ever occur to you that you may not have any dimension at all?  That you are just a character in a book, a cosmic philosophical joke? 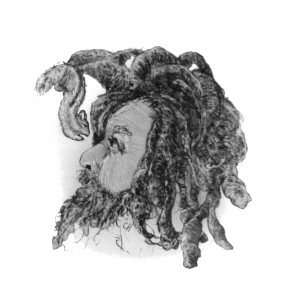 Ed: Oh, Mon…   You worry me very much with that question.

Rodgers G.:  Because you suspect it might be true?

Ed:  Oh.  No, Mon.  The truth is I already know that I am just a character in a book.  That is not my concern.  What worries me is:  What is the extent of this?  Is it not possible that you, too are just a character in…some other book, and a person reading this is just another character in an even larger book?

Rodgers G.:  Mmmm…  I don’t think we’re going to solve that one.  Okay, you have made your case for the multiple dimensions.  Don’t you think a lot of people are going to say, “That’s just baloney.  There are three dimensions.  Case closed.”?

Ed:  I suspect that no harm will come to anyone believing in just three dimensions.  It’s just incorrect, that’s all.  Just to make the point, there has to be the fourth dimension…Time.  Everything that is palpable, the seat you’re sitting on..exists in time.  So we’re up to four without so much as the blink of an eye.  Now, anti-matter exists.  It is being tracked and weighed, its potential for destruction calculated and the only way Quantum mechanics works at all is by accepting this fact.  With anti-matter comes anti-dimensions.  The dimension of up and down, right and left, and forward and backward…the three axes…they all have their counterpart in the anti-matter universe…anti-matter up, down and so forth.  And don’t forget time again.  There is anti-time.  That brings us up to eight very real dimensions without so much as raising a sweat.

Readers:  To ask a character a question, fill out the form below or visit the Submit Your Question page.  Name the book and address your question to the character.  In return you will get, not only an answer, but a little glimpse as to what the character looks like.