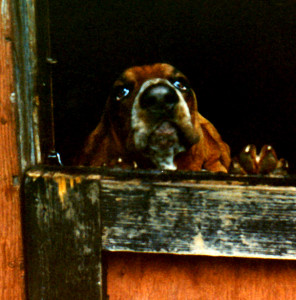 Since my book, 37 Cents a Fart…and Other Infamous Animal Stories came out, I’ve made a lot of new animal-loving friends and also a number of inquiries as to when the sequel is coming out.   Then a close friend had a suggestion:  Lest the trail gets cold, why don’t you tickle us with  a few of your new stories…let us peer behind the curtains and see what you’re up to.  It sounded like a good idea and so….  here’s a short chapter in its entirety.  Hope you enjoy!!!  P.S.  Working title for the new book is: Humpy Humpy…and even More Infamous Animal Stories.

I was sitting in the waiting room of my old friend and long-time veterinarian, Dr. Werner Margenau, thumbing through magazines that I’m pretty sure I’d seen a decade ago. That largemouth bass was still jumping at that same fly on the cover of Field and Stream.  He had just become a subtler shade of sepia over the years.

Der Werner, which is what we call him at home, finally threw open the door, peered around for something with fur or feathers, and when he saw nothing, asked, “What’s up?”

I looked at him, hoping that he was catching the subtle and nuanced message body language I was sending.  “I need some advice,” I said as pregnantly as I could.

Der Werner, always with a twinkle in his eye, seemed deliberately obtuse that morning.  “About what?” he asked.

“Uhmmm.  It’s of a personal nature,” I said, trying to be discreet, though the gal who was sitting across from me with a collie looked up and stared at me…oddly as if I didn’t have any clothes on under my yellow slicker.

“For you, or is it for one of your dogs?” he asked.  “If it’s for you, I’m gonna hafta charge more.  Shrink rates are a buck-fifty an hour.”

Dr. Margenau was in one of his not-so-rare wise-ass moods.  “It’s about Buck,” I said finally.  Buck…Bull’s Eye Buckshot was the first basset hound Pam and I ever had, the sweetest, the happiest, and the handsomest.  Unfortunately, his expertise in the ways of love weren’t matching up with the rest of his stellar qualities.

As I followed him in, I noticed the woman watching me.  I wondered whether she was going to take a seat closer to the lab door so she could hear better.

Dr. Margenau poured two cups of coffee and I proceeded to begin the embarrassing tale of Buck’s continually missing the mark.  “It’s not that he’s off a little,” I said.  “I could probably handle that…no pun intended.  He’s just…way, way, way off.”

“Like ninety degrees out of phase,” Dr. Margenau offered.

Good.  Here was a very discreet way of couching things.  “Yes, sometimes ninety which really annoys the hell out of Carly.  And sometimes one-eighty which REALLY annoys her.  Pam keeps worrying that he’s going to poke her eye out.”

I looked over at Der Werner.  He was leaning back on his recliner and squinting at the ceiling…presumably trying to imagine it all.  “Probably don’t have to worry about that,” he said.  “As I recall, he’s got a pretty sizeable…schlong.  I don’t think there’s any danger of that.”

“That’s what I thought.  But then there’s a secondary problem.  He gets all hot and bothered and it seems to just get stuck out there.  Even when Carly’s had enough and takes off…he tries to walk around, but it seems pretty unsanitary.  Blades of grass start sticking to it…dandelions, ants…”

Dr. Margenau frowned.  “Okay, now that is a potential problem.  What are you doing now?”

“Without a lot to go by, I got a warm soapy wash rag and cleaned him up and then Pam got a bag of frozen peas out of the fridge to…cool his jets.”

“I’m guessing that worked out okay?”

“Well…yeah, but…  We were hoping for some puppies and this doesn’t seem to be the way we’re going to go.  Carly’s definitely not into oral sex and Buck just seems happy to hump from any direction.”

Dr. Werner finally sat forward in his recliner and finished his coffee.  “Well, I have some good news for you and some weird news.  The good news is that once Buck finally learns what to do, you should be okay from then on.  The weird news is that you need a specialist.”

“No.  I’m just not qualified at beating-off basset hounds.  It takes…  I don’t know exactly what it takes, but I have a buddy down in New Hope who can help.”  He scribbled down a number and slid it in my direction.

I stood up and took the card.  We shook hands and I said, “What do I owe ya?”

He held up his palm like a stop sign.  “That one’s on the house.  I need a little laugh this morning,” he said, and wrinkled his nose.  We go back a long way.  I knew just by the tense of his last sentence that bad stuff was awaiting him.  And in that regard, I don’t think I could be a vet.  I could never stay objective.  As I walked out, I saw the woman with the collie sitting close to the laboratory door.  She waved.  I hoped it’d go okay for her collie.

It was Pamela who talked to the veterinary specialist in New Hope.  I always watch her when she’s talking on the phone and she manages to convey what’s going on without my having to stand next to her and listen in.  “Okay, let me get this straight,” Pam said.  “You want both Buck and Carly down.  Two o’clock this afternoon.”  She gave me a thumb waggle…yes or no? and I waggled back.  It was now or never.  Time to make bacon.

How is it that dogs can find exactly the worst possible moment to do whatever it is they do?  The second vet’s office had a picture window in the waiting room.  Pam brought Carly around the passenger’s side…red collar, red leash, while I brought Buck out, all studly in his black-on-black motif.  We joined together at the front of the car and began making our way up the little cement walk.  And it was then that Buck decided he was ready for round twenty or round forty-seven.  We’d stopped counting.  Well, he climbed on all right.  Being ninety out of phase isn’t too bad, but one-eighty just looks bad.  I glanced in the plate-glass window.  We had an audience.  I shrugged as if to say, “What can I say?” but I know what they were thinking.

Pam went in first with Carly, while I had to carry Buck in, lest we be searching around for bags of frozen peas.  It wasn’t the best entrance we’d ever made.

Dr. Lanctot’s nurse/secretary was helpful.  When she saw the scene unfolding she asked if  she could bump a couple of kittens that were ahead of us.  “It’s sort of an emergency,” she whispered.

Inside, Dr. Lanctot’s lab was nearly identical to der Werner’s, a bit newer perhaps, but all the same stuff…big silver scale where you had to weigh everything before you got waited on.  Shelves, drugs, and the identical smell.  Identical.  I wondered whether every veterinarian’s office in the country smells the same.

Dr. Lanctot entered.  I think he was about to ask the usual, “What seems to be the problem?” but then he saw Buck.  It looked like he’d inherited his equipment from an Arabian stallion.  “Good,” he said, “Buck’s already done the hard part.”  He scrubbed quickly, donned his rubber gloves, and…a plastic funnel with a baggie attached.  High tech stuff.

He got the funnel in place, reached around backside and two and a half seconds later,  Buck was a very, very, very happy camper.

Pam had been quiet till now. She cleared her throat to speak.  “How exactly…” she began but then she saw my eyes.  And we had one of those non-verbal conversations that only people who’ve been married two hundred years can have.  Without saying anything, Pamela was saying, “C’mon.  Don’t you want me to know how to…”

She changed her look fractionally.

She shrugged and then stuck her tongue out at me.  Lanctot never even knew we’d had a discussion.

Dr. Lanctot then took what looked like a turkey baster…also with a long neoprene tube attached, pulled the plunger out, filling the baster, and then began patting Carly on the head and massaging her nipples.  “Oh, you’re a pretty girl,” he said about fourteen times, as he guided that thin tube inside her.

Dr. Lanctot smiled.  I suspect he was hoping I wouldn’t say anything stupid just then.  “That’s it,” he agreed.  “Just keep her quiet for the next hour or so.”

“What do I owe ya?” I asked.  I don’t know.  There was something about the plastic funnel and the four-second hand-job that made me think this just might be a freebie…or at least a cheapie.  Not.