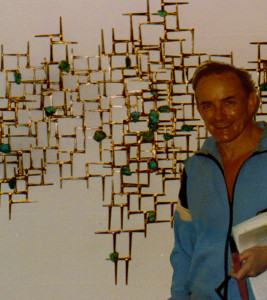 A lot of guys like to refer to themselves as Alpha Males.  It sounds powerful and laden with testosterone, maybe a bit dangerous, but those terms, in themselves, aren’t necessarily a compliment.  Many feral pigs are dangerous, powerful, and probably dripping in testosterone, but if you were a woman, you wouldn’t want to marry one…much less mate with one.

So…what’s going on?  Where did we men get off the track?  The good news, and in the big picture it’s really good news is:  Whatever snide things we older generation have to say about youth, they are veering sharply away from the Dinosaurian Concept of Macho Man that was spoon-fed to us.

Modern Man, enlightened man, isn’t afraid of women, doesn’t need to put them in their place and call them “the little woman”.  Modern man doesn’t see jobs so much as, “well that’s women’s work” vs. “man’s work”.  Instead, their attitude is, “Hey babe, we’re in this together.  How can I help?”

So far…so good.  But the problem goes deeper and right now, today, there’s still a HUGE wrinkle between what men perceive of as their job and their relationship to the rest of the world.   You can sum it up with a word:  Leadership…true leadership.  In the olden days, we, who are definitionally dinosaurs, were taught that there comes a time when you have to stand up and…be a man.  That’s still true, but what that means has evolved…a lot.

Being a man does NOT mean, frightening your mate physically or verbally, or psychologically into submission.  Being a man does NOT mean going along with the guys down at the bar, the gym, the court, the watercooler when someone belittles a woman, gay, black, etc.  just because you want to get along with your buddies.  Being a man is often the complete opposite of that.  It’s having the cajones to say, “Hey guys, I think you just crossed a line.  Wanna try backing up…or off a little?”   It’s a little harder to do this than just go-along.

Right now the military is up to its eyeballs with male soldiers abusing, raping, and degrading their fellow female soldiers.  Right now, the top brass are twiddling their thumbs, looking the other way, and just hoping the whole thing will go away.  You call that leadership?  I don’t and I was a captain in the US Air Force.

Right now the Catholic Church is also up to its eyeballs with pretty much the same thing.  The only difference is this abuse occurs mostly toward young boys and girls who can’t even protect themselves.  Oh, and the gals who are in the trenches, doing the good work for the Catholic Church are getting hammered.  I’m referring, of course, to our wonderful nuns.  And who is doing the hammering?  Guess.  This has to stop.  You can wear a cardinal-red cape, and still be a dinosaur.

Right now, our senate and congress are ALSO up to their eyeballs, and to such an extent that even the basic job of hammering-out legislation to make the country function, is too unimportant.  Better to just tear the country apart?   I don’t think so, and most Americans don’t think so either.  We’re better than that.  We used to be the BEST, but you don’t stay the best by lying, back-biting, and back-stabbing.

Father Greeley (pictured above with one of our sculptures and the manuscript he was working on in ’78, The Making of the Popes.   He also wrote terrific, often sensual poetry).

Three men I’d like to mention on this subject and I’ve chosen three who’ve approached life from polar opposite sides.  The first, Father Andrew Greeley, who died this week.  Father (Andy) Greeley was our friend when we lived in Tucson.  He was unassuming, and our relationship began when he began coming into our studio and ordering religious sculptures…large crucifixes mostly.  I’ll skip the personal stuff, but Father Greeley became a good friend and the more I came to know him, the greater and more intense the respect became.  Quiet, slight of build, soft spoken, but with the courage of a tiger when it came to telling the truth and questioning…everyone…anyone who was doing wrong or perverting the true work of the Catholic Church.  In telling his stories (over 120 books) and appearing on television, he angered many in the Vatican.  He questioned the abuse of children by priests in a way that was prescient to what is going on today.  Though he was a quiet man, he was amazingly courageous.  The church, the Vatican, the priests aren’t always right…just because they say they are.  All of those institutions are comprised mostly of men.  And men being human are imperfect.  We’re all imperfect.

Michael Shermer:  Also a friend and our friendship began in the early 90s when he was a professional bicyclist among other things and founded RAAM, Race Across America.  …that’s another story, but more importantly, Mike went on, soft spoken, gentle, and smart as a whip, to create SKEPTIC Magazine.  A magazine not devoted to being iconoclastic, but devoted to the true meaning of what it is to be a skeptic.  The term, skeptic, has taken on a negative connotation of late, but essentially a skeptic says:  “I’m not going to buy what you’re selling just because you say so.   Make your case.  Prove your point.  Give me some data…repeatable data and we can get into this more seriously.”  If you read carefully, you noticed that neither one of these powerful leaders had to have six-pack abs, a Porsche Carrera in the driveway, or be six foot-four.  The thing that gave them their leadership ability was a profound bravery in pursuing what is right, what is good, even in the face of huge adversity.

Jackson Katz: The third member of this triad…and it’s an unlikely one, is a gentleman by the name of  Jackson Katz.   He’s on a TED lecture that you can watch  right now, dealing with…guess what, being not just a man, but a true leader.  Standing up for women, or gays, or latinos, or blacks, or anyone else who’s getting trounced unfairly.  His lecture speaks for itself: http://www.ted.com/talks/jackson_katz_violence_against_women_it_s_a_men_s_issue.html The thing that made this country great was the fact that it was a melting pot.  Most of us are “mutts” and I’m proud of it.  I’m part English, part German, part Scottish…maybe more, but first of all, I’m an American.

It’s time to step up to the plate and cut-the-crap with the back-stabbing, innuendo, hatred, bullying toward our fellow man.  It’s time to be a leader…a true leader.   Most guys today will agree on one thing.  The Navy Seals are about as tough as they come.  Don’t mess with them…just don’t.  But do you think they’re loud? boisterous?  macho men?  Most of them are…you know where I’m goin’ dont’cha?  They’re soft-spoken, thoughtful, smart as a whip, professional, fair and impartial.  One Navy Seal just stepped forward today.  He…is now She.  Care to judge him…her on that?  I wouldn’t if I were you, because this trans-gender dude…gal will kick your ass.  Oh, and if she doesn’t,  his Navy Seal buddies will.  They know what leadership is and it isn’t what’s between your legs, or the color of your skin.

It’s time to look in the mirror, guys, and realize that it’s time to step up to the plate.  Be a leader of men.  Be fair.  Respect women, respect your fellow man whatever he or she looks like.  Doesn’t matter how old you are.  You don’t have to leave dinosaur footprints when you walk.

1 Response to "Dinosaurs Still Walk the Planet. Many of Them are Married, Hold Office, Drive Expensive Cars…"