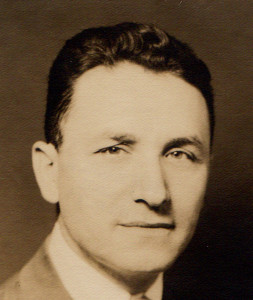 Yes, it happens to all of us and at some age: reality sinks in, the finite, terminal nature of living on this planet.  For Pam’s dad, my father-in-law, it happened on a Friday night.  We got a call from Florida saying that Emery was dead.  Like many families, Pamela’s family was…different, but in this case, I mean truly different.

Every girl I’d ever dated in college had said something on the order of, “When you meet my folks…they’re a little weird,” and I’d gotten used to that.  Pam said the same thing on our fifth date and I thought, yeah, yeah, yeah...  But when I drove up to  Westchester County, NY. to meet her folks the first time, well…

Have you ever watched an old Bela Lugosi vampire movie?  Dr. Emery Bolgar, Pam’s dad, was Count Dracula, only taller and dressed perpetually in a suit and bow tie.  When he opened the front door for me, he grinned oddly and said, “Come in, Henry...  Sit dowwwn.”  My mind filled in the rest, “I vant to drink your blood.”  Later over dinner, I asked him if he’d ever watched a Bela Lugosi movie.  He  grinned oddly and stared in my eyes.  “Yes, Henry,” he replied. “Bela Lugosi was Hungarian.  I am Hungarian.  I grew up in what used to be called Transylvania.”  Guess what.  He wasn’t joking.

Unfortunately, it wasn’t all fun and games.  Emery Bolgar was European with all that entails.  Also very bright and extremely hard-working, but from the many tales Pamela told me, he was also very often an SOB.   That he didn’t hate my guts or mind my visiting for weekends was about as good as it got.  He didn’t suffer fools…nor anyone else for very long.  He was tough, arbitrary, smart as a whip, and to my knowledge had no hobbies whatsoever.  He applied all of his energy to being a physician.

When I  was in pilot training, I finally called Pam on the telephone in the BOQ (bachelor officer’s quarters) and asked her to marry me.  That in itself is a long story.  Pam had just sent me Love Story to read and I was in my own trance…but I digress.  Pamela accepted.  Immediately after the call, I called Emery, told him I’d asked Pam to marry me…and asked for his blessing.  He was gracious and succinct.  He said,  “You have my permission.  I welcome you to the family.”  We weren’t on more than twenty seconds.

The wedding:   Like everyone else, I’ve been to a bunch, big ones, small ones, intimate ones…a couple of what could best be described as dog-and-pony shows.  What Emery threw for his only Hungarian ballerina daughter was…amazing.  The stuff of storybooks and HUGE!  I don’t think The Donald could have done much better.

Afterwards, I worried aloud to Pam that I didn’t want to be in Emery’s financial pocket with him sending big screen TVs and new refrigerators in return for a life of utter slavery.  Pamela laughed like hell.  I needn’t have worried.  After the wedding we were on our own…10,000%.  And it was good.  Our first home was the size of a shoebox, but it was ours free and clear.

Where am I going with all this?  Think about your own life for a moment and you will shortly see what this communication is all about.  Let’s flash to that Friday night.  We got the call and when Pam got off the phone, she didn’t cry.  She didn’t do anything at all.  She just sat down and went serious.  No one in her family was or is emotionally demonstrative so I wasn’t surprised but… I just didn’t know what to do.

We flew down to Florida to help take care of things.  Ella, Emery’s wife, had been living in a condo with Emery for years now.  By the time we got down there, every vestige of what had been Emery was gone, reduced to 14…goddamn Hefty bags.  Ella wanted Pam to go through and see if she wanted to keep anything before she put it out for the trash.  The trash bags were in Emery’s old bedroom and we sat down on the floor and started going through them.

The first thing that stuck out were his bow ties.  Somehow each one was now…Emery.  Pam found his first stethoscope, the one he’d kept and used all these years.  She put that aside as well.  Photos… of Pamela dancing at Harkness Ballet and a whole bunch of stuff…old paperwork, some diplomas that he’d fought and studied for years to achieve, certifications and re-certifications, as well as a tiny medal he’d received in Hungary for winning the gymnastics award for the Iron Cross. And there were other things: an old battery-operated chess set that I’d sent him one Christmas.  We both liked to play chess but Emery didn’t have a lot of friends.  It was worn.  It had been used.  And there were the books I’d written and sent to him.  He’d read all of them.   I think it was the bow tie that he  wore, even when he mowed the lawn that finally pulled the pin on Pamela’s emotions.  She lost it and, I think some splinters needed to come out.

Yup, he’d been an SOB.  Yup, very European, bad tempers and sometimes violent fits of anger.  But he’d taken care of his wife and two children as well.  In death, he had planned extremely well to insure they continued to be taken care of…so now no one would ever have to eat cat food, as he liked to say.

The caveat here and you get it when you pore over what’s left of a life:   If you think stuff is important, look around.   Stuff-wise it boiled down to 14 Hefty bags.  The rest is all bullshit.  There was an invisible other story going on as well.  It’s that invisible story that you’re going to leave behind…not the BMW or the house on Long Island.  If there’s something you need to do…something you want to say to someone…don’t wait.  Do it now.  Eventually we are all just memories.  Try to make them good ones.