I Just got back from the liquor store (it’s called a state store in PA) where I was shootin’ the breeze with Frank, the manager.  He sometimes shares tidbits of wisdom that he’s gleaned over the years and we got to talking about who buys what, why all the weird labels, and how your choice of booze says something about you…just not sure what.

You can now drink a bottle of  Fat Bastard, Freak Show, Menage a Trois... (Bring this home and your spouse might ask, “Honey, are you trying to tell me something?” ) There’s also Honey Badger, literally with a cluster of little plastic bees on wires waving above the bottle.  The motto of the honey badger:  “I don’t give a shit.” I wonder what the wine tastes like.  And then, presumably for Manhattanites who only watch Woody Allen movies, you can drink, Middle Sister (Drama Queen).  You can also buy Black Box... and no, I’m not goin’ there. 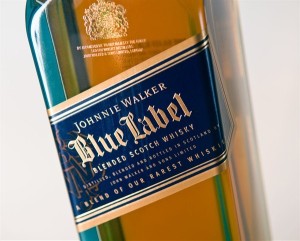 For the purposes of this article, I’m ruling out the ultra expensive French wines, some of which cost as much as a good car.  Why?  Well…duh…  You’ll find out soon enough. Suffice it to say, our range starts out at Charles Shaw’s Cabernets…aka Two-Buck- Chuck for pretty obvious reasons and tops out at the most expensive scotch I’ve consumed (Johnny Walker Blue)  which sells for about $65.00…….a shot. If you buy the bottle, it’s $200.00 for a fifth, give or take.  That makes it approximately one hundred times more expensive than the Two-Buck Chuck.

FWIW: Yeah, I’ve consumed a small bottle of  Blue as part of a Christmas sampler, along with the Gold, Green, Black, and Red.  For my taste and wallet, Black’s just fine.  Gold, a little better.  Blue…?  Remember The Emperor’s New Clothes? 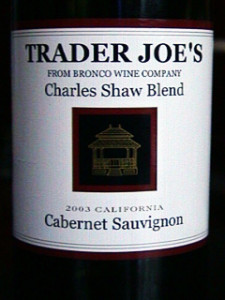 Don’t let that understated label fool you. This is Two-Buck Chuck and it’s not that bad.

Two-Buck Chuck, however, sounds hideous, sounds like something you’d find in an alleyway, and leave there.   It’s not bad.  I’d say, perhaps a bit uninspiring.  But c’mon…two bucks?  A summer day?  Have some wine with your hot dog and nachos!

Here’s a little discussion that actually occurred a while back.  At a dinner party, toward the end of an otherwise pleasant evening, the alpha-male at the party brought up the subject of fine wine and then proceeded to explain that HE could tell the quality of wine, just by gazing at the label.  I chuckled, thinking he was making a small joke, but then Alpha-Guy cleared his throat and asked if I had a problem with the statement.  I stopped laughing and said somethng on the order of,  “Oh, I’m sorry.  You were serious?”  He was… 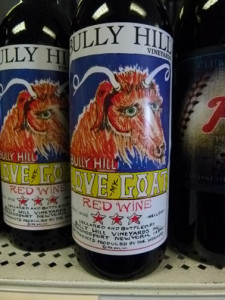 I kicked off with a question:  When you go to a bookstore, do you just look at the pictures on the cover?  I understand judging a book by its cover is, indeed, the very best way to judge literary merit.  Then I proceeded to ask him what the eight kajillion wacky wine labels said about the wines inside.

It was late, and he’d had a lot more fine wine to drink than I’d had scotch and it didn’t occur to him to back away from the discussion.   …I very often fall into a sort of humorous mood when debating…arguing and this only seemed to annoy him more.  I kept asking legitimate questions, which were more or less unanswerable.  It didn’t go well.  Fortunately he was just another guest at this party.  I see him once in a while.  We don’t talk about wine. 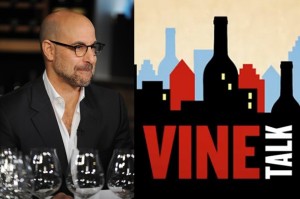 Vine Talk:  Same thought…Different Approach:  Stanley Tucci, Emmy award-winning actor, writer, producer…and wine expert, hosts a TV show called Vine Talk.  Famous guests show up, actors, writers, famous chefs, someliers, wine growers, wine tasters…as well as wine-savvy guests to examine what’s good and what isn’t, and why.  They do a blind testing of three different bottles of a type of wine.  One is ultra expensive, one is inexpensive, and one is in-between. 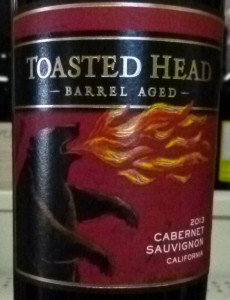 Shall I spare you the drama?  There was no reliable correlation to cost versus taste.  None at all.  There was also no correlation between the extravagance of the label…and the taste.  More importantly, every sommelier who came on the show as well as Tucci and most of the guests came to one ultimate conclusion:  Buy what tastes good to…you.  It’s that simple.  If you spend $200.00 on a bottle of wine and it tastes lousy to you…it’s a lousy wine.  If you find a bottle that tastes just great…for $9.99, your impression is as valid as anyone’s. Don’t be bullied by wine snobs…or any other kind of snobs.

Freshman year at F&M it was Smirnoff.  I remember dumping some maraschino cherry juice in a glass full and it was great.  Any booze freshman year was great.  Junior year:  Stolichnaya (Stoli).  It cost more, but packed a punch and for some reason, the girls were impressed.   Reason enough.

Most recently, vodka has gotten as expensive as good scotch…which bewilders me.  Except for the flavored vodkas (tip: flavor your own damned vodka with real flavors…real lemons, peaches, apples if you like that sort of thing).  I like to flavor mine with an olive while I whisper the word, vermouth, above the glass.  (For a perfect martini, don’t whisper too loud.) 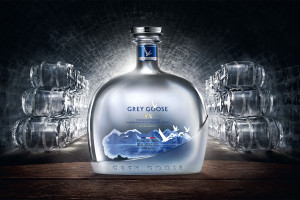 Very Impressive. It really does look and smell and taste like Grey Goose

True Story:  Two of our gay friends kept bugging me big time because I don’t serve Grey Goose at our house.  Annoying…  Sooo, a British friend suggested that he had an empty bottle of GG I could have.  Rinsed it out.  Filled it with Smirnoff . Put the GG bottle in the freezer.  When our picky friends came over, I dragged the GG bottle out, all frosty and minus-four degrees.  Splashed in some fridge-kept vermouth and a frozen blue-cheese stuffed olive.  Oh wow!!!   Slaps on the back!  “Henry, you finally graduated into the next century!  Bravo! ”  I never told them. 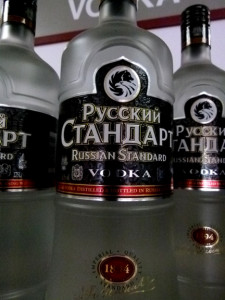 What brand of vodka do  Pam and I drink?   Quick…don’t cheat.  Try to pronounce the name of this vodka.

You couldn’t pronounce it and I can’t spell it…literally can’t spell it.  The Russian letters are all…Russian.  It was recommended to me by a guy at the state store and I watched a YouTube of a brunette Russian babe showing how Russians make a martini.  I wouldn’t survive.  First hint:  Martinis are metered-out in drinking glasses. We Americans call it Russian Standard.  No wussy peach flavoring.  It’s vodka.  It tastes like Russian Vodka.  It’ll kill ya, but you’ll die with a grin. 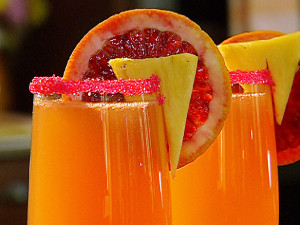 Yeah, I learned early at F&M.  Best way to impress chicks at a bar, order Johnny Walker Black on the rocks (look bored when you order).  I went out to a bar with a Jewish friend of mine a few nights ago.  He was just getting ready to order a Mimosa.  I put my hand on his shoulder.  He said, “What?”  I said,  “You can’t do that, Bill.”  He said, “Why?”  I said,  “There are limits…” 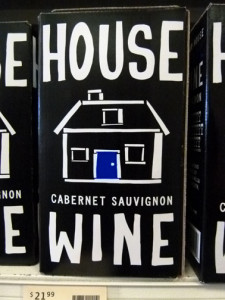 At home…when nobody’s watching…and it’s been a hard day, what do we drink?  Sometimes it’s something from a cardboard box.  Then to make it even more hideous and unacceptable, we pour in a couple of jiggers of  minus-4 degree Russian Standard vodka.  Pamela calls it a Catawba Special.  If you’ve been reading these essays, you know why.  Don’t knock it if you haven’t tried it.  We also call it two-step chuck.  That’s about as far as you’ll get.

P.S.  FWIW, Pam grew up with a gal who is now one of the foremost wine critics in the country.  But there were good ole days for all of us when we drank most anything.  Now…we’re snotty.  When friends give me a hard time, I pull out the 18-year-old Macallan and start sipping.  “Oh….  could I have a sip of that?”

At Officer Training School, they had the “OT Special.”  It consisted of a small steak, baked potato, garden salad, one roll, strawberry shortcake…and a small bottle of Mateus for two.  It cost $4.95 a person, tasted good, and that Mateus bottle still looks pretty impressive.  The good ole days… 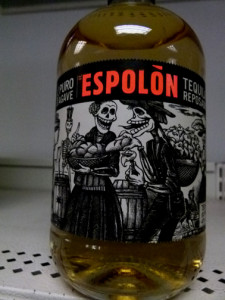 Tequila:   Think about what these tequila makers chose to represent their booze…and then think about what your head’s gonna feel like the next morning.  Just yesterday, I was listening to an assessment of what scotch tastes like…just after it’s made…no aging. “It’s a lot like tequila, it’s clear, raw, knocks you on your ass, gives you a headache…that’s why they age it.”  I’m not too keen on the need to drop a worm in the bottle either.  Look closely at this label!

7 Responses to "What You Drink Says…Something About You."