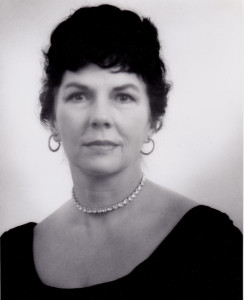 I had made a quiet promise to myself to write only articles that were of a universal nature…something that anyone could use or appreciate or learn from.  But that wall crumbled a bit the other day when Pamela mentioned what had happened upon her father’s death.  I wrote about it because there was, indeed, a universality to the pathetic circumstances that followed his noble career.  I closed the book on the subject and decided to press on and get back to…general things.

But then a funny thing happened.  I got an e-mail from my old roomie at F&M.  He’d resonated, I think, more to what I’d had to say about…what’s left when you die, than other things I’ve written.  And he asked me if I was going to write about my mom.  Then I got an e-mail from another friend with the same general question, then another and this morning my sister sent me a youtube of a classical piano piece that Mom (Christine Holzer Harvey) used to play.  I was playing it on my iPad in bed and the tears began to flow.  So… here goes.  I’m writing it about my own mom, and the only thing I can tell you is…there is no exaggeration, no hyperbole in this article.  She didn’t need it and it’s important for you to understand that.

Probably the best way to sum her up is:  Mom was Auntie Mame.  She was also a world-class pianist.  Imagine going to Carnegie Hall to see…your mom playing.   She was also turn-and-stare beautiful.  Think of a young Ava Garder or Joan Collins.

One of my first recollections of her was kindergarten.  I’d gotten sick and was barfing like a champ.  The school nurse called Mom to pick me up.  She showed up in her usual mink stole, black dress from Lord and Taylor’s, 4″ black spike heels, and her pearls…to pick me up.  When she showed up, I remember even the little squirming mass of 28 tiny bodies stopped and stared.  A girl whispered to me,  “Is that your mom?” and there was a tone to her voice that I didn’t understand at the time.  By the way, that aura never left her.  To scroll ahead for a sec.  freshman year at F&M I brought some friends home for the weekend and one of them said, “Your mom’s about 4000% cooler than you are.”  I said, “Yeah, no shit…” because it was true.

Lest this whole article begins sounding like a souffle that needs popping, let me get the negative stuff out of the way quickly.  It’s a short list.  S’cuse my French, ours was a family that used and uses swear words like tabasco sauce… Mom didn’t give a flying-fuck about housekeeping…at all…period.  A recent argument within our family came to a pivotal point of how often one is supposed to clean behind the refrigerator.  To my knowledge, Mom never in 60 years at Drakestown deemed it necessary to even look back there, much less clean…a habit with which my wonderful wife, Pamela, thoroughly agrees.

Mom also spent 90% of her time practicing.  She had, not one, but two Steinway grand pianos and the bulk of my childhood was spent under the piano playing with my stuffed animals and listening to glorious music.  Sometimes she played a heavy Beethoven or one of the Russian composers and I’d have to scurry out and hide someplace safer and quieter.  But it was heaven.   And when she’d play organ down at the St. James church on Sunday, sometimes she’d warm up with a little Bumble Boogie before the crowds showed up.  You haven’t lived until you’ve heard Bumble Boogie on a church organ.  I think that’s when Mom became my patron saint of all that I hold in high esteem.

I don’t know if this was a plus or a minus…you could make a viable case either way, but though never a single barrier was placed between me and what I aspired to do, I was also expected to be the BEST.  This wasn’t something to strive for. It was expected.  I only went out for one sport in high school…track.  I was the N.J. state champ in ’66 for throwing a discus way the hell out there…farther than anybody else.  But no celebration, no pat on the back.  It was just expected.  The only high point I remember that day was after the meet when mom came to pick me up, she had just bought a new 1965 Pontiac GTO, a monster machine even now.  As I walked over to her car, I made a little twirling motion with my finger to her and she knew.  She put put her foot on the brake hard, revved the big V-8 and popped the clutch.  There was a huge roar and a giant plume of tire smoke like someone had set off a smoke bomb.  The track team loved mom, too and I heard about it for a week afterward.

Probably the most valuable thing I ever got from Mom was a series of lessons she gave me regarding…  Care to guess?   understanding women.  Let me rephrase that:  UNDERSTANDING WOMEN.  She explained that this was something that Daddy had never gotten quite right and she was sure as hell not going to let me miss-out on the fun.

I remember my first lesson vividly.  She’d taken me to Lord and Taylors to show me how women shop.  (I’m really good by the way) but the lesson began at The Bird Cage, Lord and Taylor’s up-town place to have lunch.  She began by very unobtrusively asking me to observe the other women around us then asking me to decipher: the twitch of a nose, a subtle raising on an eyebrow, the tiniest roll of the eye or clearing of the throat.   I learned that women can say more with the moistening of their lips than a man can in five minutes of jabbering.  I was a willing and eager student…and remain one (hint:  you never get to the end in trying to learn about women.  It’s not that they really want you to understand them so much as…you’re supposed to keep trying forever.)

In my mad scientist inventing phase, Mom was my supplier and my accomplice, often to my father’s chagrin, though he was gone so much on his freelance writing excursions that it wasn’t really a big factor.  In my world, the world that my mother created for me, EVERYTHING was possible.  EVERYTHING was subject to interpretation or better…improvement.  That’s the part that stuck in my brain the most.  With the help of Bell Labs in N.J.  I built one of the first home made lasers as a science project.  By today’s standards it was weak.  It could pop blue balloons but not red ones…(maybe the other way around, I forget) but Bell Labs saw fit to give me a two inch long by quarter- inch diameter ruby laser, polished on both ends to optical quality.   It was a scary thing and the science lab at school had to put yellow tape on the floor in a ten foot radius around where I worked…so nobody other than I would get hurt.  It was no big deal around the kitchen table.  I remember Mom asking if there wouldn’t be some way to hook up the laser to some sort of optical Moebius Strip…just to see what would happen.  (Turns out 30 years later she was onto something).

I dated a lot…all the time, grade school, high school, college and Mom was always the perfect hostess.  When I met Pamela, however,  Pamela and my mother hit it off so hugely that I suspected I might be done for.  I was right.  When I was away at officer training, Mom flew down and flew Pamela down as well to spend Christmas with me.  Skinny, pale, shaved head, I was one of a sea of such bodies.  When Mom and Pamela showed up at the OTS club, Pamela in a chromium yellow jumpsuit, Mom in her quintessential pearls and furs, one guy said,  “Good Lord!  That’s your girlfriend?  That’s your mom?  I’d be hard-put to choose!”   It was kindergarten all over again.

Apologies for what to many will sound like a sacharrin candy-gram.  But everything I am now, everything I’ve learned about women, all the weird inventions, contraptions, improvements to things that I’ve come up with, all have a direct line to one single person.

The other night we had some friends over for a dinner party and I had the iPad running through the stereo.  It was nice soft classical dinner music.  One guest stopped eating and said,  “This music is really amazing.  Who’s the pianist?”  I said.  “My mom,” and then I lost it a bit.  I’m not ashamed.