Together, you and I have dived into some pretty dark topics lately, and so…in order for us not get a lethal case of psychic nitrogen narcosis (the bends) we’re taking a little culinary diversion today:  The Good, the Bad, and the…Is this an entree or an hors d’oeuvre?   …Huh?

I’ve had a pet peeve going on for a while now.  It involves gourmet meals at restaurants which I can only afford when someone’s dying or having a birthday.  These are the ones that have the little dollar signs after their names to at least give you a chance to bail out.  If you ever see  $$$$$+ well, you’ve been warned.  Now, that’s bad enough but c’mon, I’m old-school and I’m a guy.  I’m likely to come in from a hard day, hot & sweaty and say something on the order of, “Hey Pam, I dropped three maples and two oaks today. Cut ’em into firewood, too.  What’s for dinner?”  In other words, once in a while I want some really good food and a good ole plate-full of it.

Strangely, however, there’s an equation in up-scale restaurants that is starting to get weird.  The up-scalier the place, the bigger the plates are and the tinier the portions.  For a bunch of years now, the cool hip thing is to put a beautiful but TINY serving in the middle of this giant plate.  By tiny, I mean seriously tiny.  I had one course in which  there was a small teaspoon in a little cup. There was some kind of brown fluid, a tiny purple flower, some sprigs of (grass?) and three berries surrounding it.  AND….then they used the whole rest of the plate as a canvas on which to squirt abstract patterns of different fluids.

Some of them might do Jackson Pollack proud...but once again, being a guy, my mission that night was to come in, sit down, have a drink, and then actually eat something.  Oh!  Oh!  I just remembered possibly the most difficult concept for me to wrap my peanut-brain around.  On one of the tributes to the chefs, a chef in California served:  Big white plate and in the center of it was a cluster of grapes…without the grapes.  Just the stem…not even sure that’s what you call it.  In our house we call that garbage and throw it in the disposal.  Maybe he was being ironic…

Ohhh, Henry, that’s so quaint, but you’re truly missing the point.  Am I?  If you were to take 20 or 30 of those teaspoons of things I can’t recognize and put them in a bowl, it might be a pretty tasty soup or something.  As it is, it’s $15.95 for a teaspoon of…who the hell knows what it is?  That’s expensive.

Not terribly recently, we went to an up-scale French bistro in our area.  I ordered Salmon Truffles, pronounced Troof…rhymes with  Floof and….Spoof.  I love mushrooms but I’ve always been too cheap to pay $900.00 a pound for a brown fungus that a large pig has rooted out of the ground.  That night…the Troof arrived.  The whole thing was the size of a large strawberry, pink and flaky.  I gazed down at the plate and asked, “Where’s the troof?”  I was very tempted to say, I want the troof, the whole troof and nothing but the troof, but Pamela can read my mind and across the table she quietly shook her head.  Turns out the troof were the little things that looked like three brown fingernail clippings…little fingernail clippings at that.  After the $$$$ meal, I must confess, we drove into New Hope and ordered a large sausage-and-pepperoni pizza from Nicholas.  Oh God, it was good.

TWEEZERS and a LOOP: If you watch the Food Channel, or any of the food specials on TV, you’ll actually see how these chefs make their tiny entrees.  They…(I’m not making this up) use tweezers, a light like you see in the dentist’s office and sometimes…sometimes...something resembling a jewelers’ loop.  After a day of chainsawing, or plowing out a half-mile driveway in a blizzard (and saving my neighbors) or re-graveling our driveway, a tweezers and a jeweler’s loop isn’t funny. 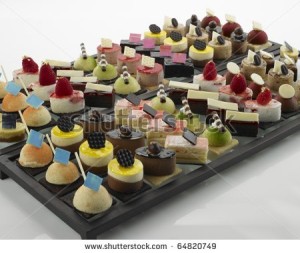 A year later….the very same place that made the troof:   Had a predictable dinner, realizing we’d probably slip out to Nicholas afterward only….that night the gods smiled down on our tiny party.  As the gal in the French outfit made her way toward us with a HUGE tray of  really expensive desserts to pick from…she tripped.  She went down!  The tray careened onto our table and deposited twenty or thirty fluffy expensive desserts on the table and my suit.  The little French gal turned pale.  The owner of the restaurant came out instantly (we knew him).  He began apologizing profusely in broken English and asked what way he could make things right.  I asked him to please bring us four spoons.  It really happened.  Didn’t have to go to Nicholas that night.

Watching an Episode of Iron Chef:  Wish they’d bring that series back.  Loved the premise!!!   Three great chefs fight it out in real time with ingredients that are disclosed only that moment on the air (a bit skeptical of that but it doesn’t matter).  What’s cool is they pick any old crap for them to use.  Lettuce and apples.  Rutabagas and pork chops…stuff like that and you have to design a whole meal around those two ingredients.  The night I’m thinking of was octopus and…I think it was peanut butter.  What the show directors hadn’t counted on, however, was that the octopi (octopuses?) had a different plan in mind: ESCAPE!  It was a nasty gory fight and I do remember one chef chopping tentacles and having the tentacles crawling out of the frying pan.

Short Takes:  Giada:   Well, she’s very pretty in a scary kind of way.  I always feel like she might bite the lens off the camera if it wanders too close.  And her culinary range seems…well…pretty limited.  If you took garlic, olive oil and mushrooms out of her menu, the show would shut down. 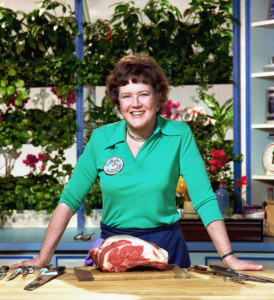 Julia Child:  You have to have some silver hair to remember her.  She introduced haute cuisine to America…and in black-and-white TV.  Sometimes, well pretty often, it seemed like she’d had two or three belts of the Dom Perignon before she went on.  Things fell on the floor.  (Five-second rule applied then) and it’d get thrown back in.  GREAT recipes, plus she didn’t need designer pans, designer knives, $20,000 stoves or $30,000 granite counter tops.  It just boggles my mind that she was able to make fantastic meals without them…….. 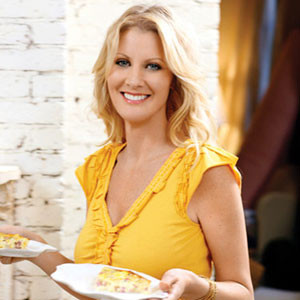 Sandra Lee:  I really gotta give her credit for no pretense whatsoever.  Very attractive blonde who believes a low cut blouse, candles and a really good martini will take you far.  And she’s right!  If you’re a guy, it’ll take you really, really far.  What was funny and strangely endearing was she’d pick something like a bucket of KFC fried chicken, put it on a cookie sheet, slather it with some white wine, a little brie, some extra seasonings and then pop it in the oven for ten minutes.  “Your husband will sing out, ‘Great food, Honey!'” and she’s right.  No pretense and consequently no nasty comments.  In this fast-paced world she was the queen of short-cuts.

Don Quixotes’:  Now this is how it’s supposed to go!  Tucson: Pamela and I were just married and I’d bought her turquoise-and-silver earrings and necklace for her birthday.  She wore a slinky black wrap that fit her tightly everywhere (in the good way.)  We drove out to what looked like a hole in the wall in the middle of the desert.  Don Quixote had great reviews and we gambled my tiny lieutenant’s pay check on it.

Inside a room right out of Casablanca, we ordered pallella and a pitcher of Sangria.  They sat us at table right next to a tiny wooden stage.  A Spanish trio came out, accompanied by a flamenco dancer, who looked sorta like Pamela and danced in a blurred staccato.  Fantastic!  Little did they know, however, that Pamela had been a ballet dancer with Harkness and…knew flamenco.  For a couple minutes there was not one, but two stars on that stage.  Then a round tray the size of a Hoola Hoop was making its way toward our table  It was heavy, smokey and sizzling.  Oh God…  We shared it with some people next to us and still brought some home.  I’ll never forget the night, the dancing, the amazing food and I don’t think anyone in the place even knew what a tweezers was.

Worst Meal?  Easy!   Happy Daze Pizza: a new pizza place in Tucson.  Question:  How bad can you screw up a pizza?  Answer:  Pretty bad.   We had a couple of beers while we waited.  Pizza arrives.  I start sniffing and looking around.  I checked the bottoms of my shoes and shook my head.  Pamela did the same. You know what I’m talking about.  Sniffed in the general direction of the pizza and Pamela’s eyes got big and round just watching me.  You really shouldn’t make a pizza with rancid cheese.  Strangely, with three dachshunds at home we figured we could at least give someone a treat that night.  Brought it home.  Squeakie hid under the coffee table.  Wouldn’t come out.  Dingo ran into our bedroom.  Charlie, the brave one, finally walked onto the pizza, sniffed it, flopped-over and began rolling on it. 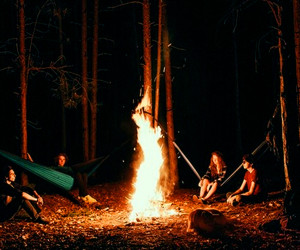 Almost Heaven…  It was the 70s, Tucson, AZ, and we’re up at about 10,000 feet on Mt. Lemmon with our dogs and some good friends camping.  John Denver’s singing Rocky Mountain High on a cassette player in the Shelby and Dave and I are out getting firewood to cook with and to keep us warm.  The culinary tools for what is to be a heavenly evening: Cast iron skillet, matches, bottle of Jack Daniels, one large bulging joint, some eggs, bacon, marshmallows, two packages of Sarah Lee brownies…and eight packages of chicken breasts..approx 50 pieces.  Sky gets dark.  John’s singing louder now and the chicken is sizzling.  At 10,000 feet the air is thin but crystal clear. STARS, meteorites, a couple of satellites trundle by and I begin to understand what ole John is singing about.  Yeah, this just what you think.  A bit of Jack Daniels, cold air, one big doobie and we managed to wipe out ALL the chicken, then ALL the brownies, followed by ALL those delicious marshmallows!  All I remember now is that it was a great night.  Yes, we inhaled.

One last remembrance of things past:  Me chickening out.  Stationed in Tokyo.  Got orders to fly to Osan, S. Korea for a secret Tempest inspection.  At 35,000 feet commencing our descent to Osan, I smell what absolutely has to be the worst septic problem I’ve ever encountered.  It was BAD.  I turn to SMSgt Hunt, my right-arm on the Tempest team and looked question marks at him.  “It’s not what ya think, Captain,” he grinned.  “Really?  Smells like septic to me.”  “Nope.  It’s called kimchi.  It’s a delicacy.  We’ll have some when we land, Sir.”  “…..You wanna bet?”  It’s that old farm-boy mentality I was raised with.  If it smells like shit…best not to be spooning it into your mouth.

P.S.  Here’s a  TERRIFIC  TED video…on Food.  If you haven’t watched it, observe how to give a seriously  kick-ass lecture…  https://www.ted.com/talks/jamie_oliver

P.P.S. As always, if by any chance you’ve had a memorably good or memorably bad meal while you’ve been residing on planet, Earth, write in and let us hear about it.   If you’re undecided…memorably BAD is always more fun!

12 Responses to "Memorable (and sometimes Miserable) Meals and Chefs"