I started sketching-out this essay with the very best of intentions.  The goal?  To dispel the growing panic over AI:  Artificial Intelligence.  Robot minds and malevolent computers reaching the tipping point of singularity and superiority where they will, Swarzenegger-style, begin the systematic extermination of mankind.

The really good news is: that ain’t a gonna happen.   Arnold Swarzenegger isn’t going to appear from the future with glowing red eyes and blow your head off.   The Siri gal on your iPhone and iPad won’t quietly decide to do-you-in because she thinks “Maschinen über alles.”

Despite our very human propensity to anthropomorphize, even the sweet voice of Siri is  merely a pre-determined computer program.  To put it bluntly, Siri doesn’t hate or love you, nor does she (it) give a flying foo foo if you use her, ignore her, throw your iPad in the washing machine or even decide to destroy the planet with a homemade plutonium bomb.

At present and for a long, long forseeable future, AI contains ZERO innate emotion, ZERO passion, ZERO ego, ZERO arrogance, pride, love, hate…religious intolerance, or nationalism (each one of these being a perfect Petri dish for  growing a war).  What computer technicians do is cleverly program-in little cute-isms to make a device appear   human, coy, sexy.  No computer or PCB has an inherent ego or desire to take over the world, or seduce your mother.   Period.

Having said that, do not rest easy, my friends.  The path ahead remains scary and is getting scarier by the day because of…..us, the human beings steering and hacking and guiding these mindless machines.

Do not worry that your new Mercedes S-Class, with road autonomy, the ability to steer, park, accelerate, stop, and swerve, will suddenly conjure up a plan to destroy mankind.  It doesn’t work that way.  HOWEVER…  Worry like hell about some guy in a nondescript van loaded with a powerful transmitter who decides to have a little fun with the morning traffic all going 75  bumper-to-bumper into Philly, Chicago, or New York.  That is a huge and lethal problem that you will see in the very near future.

WORRY ALSO that the creators of these wünder-programs haven’t thought of everything.  As recently as last week, a state-of-the-art Volvo being tested at the Volvo labs nearly killed several technicians who were observing it.  Apparently, the program to avoid running over people hadn’t been switched on.  Are Volvos malevolent?  No.  But people, being people, are  sometimes stupid, or…just human.  We make mistakes.  In a nutshell, however, the more complicated the toys are that we create, the more mistakes we make. 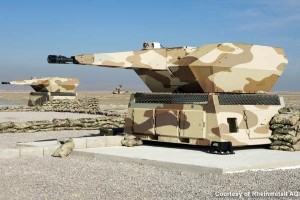 You may have missed this article:  In South Africa last week a military base having just installed a new and very high-tech, computer-run defense system, programmed to protect against all invaders, decided to throw the switch and see how things were unfolding.  Unfortunately the mechanized anti-aircraft guns had not been final-programmed not to shoot at things below a certain altitude…as in  people and buildings on base.  Nine human beings died almost instantly because of that misstep in programming.  Were the guns malevolent?  Intelligent?  No, they were not.  Human error killed them.  But what if it hadn’t been error, but computer hacking?  Then things become instantly darker.  Once again, we’re not talking AI at all, were talking HI, human intelligence…or lack thereof.

Our Military: Going HEAVY. We have, over a century and a half, made our military power  VERY smart and EXTREMELY lethal.  Don’t worry about a drone deciding to destroy mankind because it hates people  That won’t happen.  Instead, worry a whole lot about five guys in a Zodiac rubber boat, two miles off the bow of our new  Zumwalt-class destroyer.

Zumwalt-Class Stealth Destroyer:  It looks kinda cool in a weird, Legos kind of way.  That’s because it’s stealthy.  On radar it looks about the size of a small fishing boat. And, you better believe it’s bristling with the latest armament, rockets, and Phalanx-type weaponry…all computer controlled by the way.  You really wouldn’t want someone to hack into this baby and set those guns and missiles firing where you didn’t want them.

On the questionable side, however, the typical crew of a modern day naval destroyer is a tad over 300.   Unfortunately, they chose to cut down a bit on the number of people running the show.  Computers have replaced over half the crew with an estimated 142 members aboard the Zumwalt.  The obvious question, of course, is this:  Could an enemy task force, or mole, conceivably hack into this 12-BILLION DOLLAR weapon of “mass defense”?  Yes, they could.  You can count on it.  The secondary question is: what provisions are set up to handle such a situation?  Uhmmm…well….

Another HUGE problem:  If you’ve been reading these blogs a while, I sometimes fall back on an old idiom, “I’m not making this up.”  I’m forced to use it again.  One of the very serious Achilles Heels of this ship is:  because of its reverse-hull stealth design, this destroyer is seriously susceptible to large waves coming in at an unfortunate angle, and sinking it.  It can, and under certain circumstances, will tip over and once that happens, you’ve lost 142 souls and 12 billion dollars.  A twelve billion dollar destroyer that can’t handle an errant wave??????  Does that not sound like something ripe for fixing?  Maybe someone should consider welding some training wheel pontoons on the side or something…just in case.  It’ll only cost another hundred million or so. 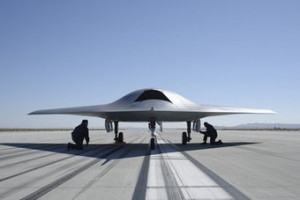 X-47-B:   Today, right now, we have a completely computer-run (no people at all ) stealth bomber that can take off and land from an aircraft carrier…all by its lonesome.  It’s called the X-47 B and it’s expensive.  Money aside, once that pilotless bomber takes off it relies on signals to tell it what to do next.  It can do a recon off the coast of Russia, OR, with a bit of clever hacking, it can circle back and auger into the same aircraft carrier that launched it.  OR head toward Manhattan, Dallas, Boston, San Francisco.  The only thing controlling the X-47B is whatever electronic signal dominates it.  And then there’s just jamming.  Very low tech, but if the bomber doesn’t know what to do next, where to fly next, we’re in trouble.   Is the X-47-B capable of delivering a nuclear warhead?  It is capable of carrying and delivering dozens of nuclear warheads, all without a human brain on-board to ask, “Is something going wrong here?” 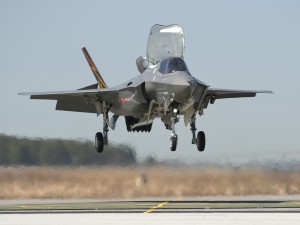 F-35 Lightning II:  Like every other war machine we’ve created, this one is way, way, way over budget.  The Pentagon has deemed it just too big a project to scrap at this point despite huge problems.  Did you know that this, our baddest, most costly flying machine of all time, really doesn’t like to guzzle anything but chilled jet fuel?  Warm gas…like what is ubiquitous in the Persian Gulf makes it a bit grumpy and hard to start.

$1000,000,000,000.00  Care to guess what the F-35 program has cost you, the American consumer?  It’s over a trillion dollars and it’s still buggy as hell.  Think of what a trillion dollars could be used for in defense of our American cities, our American nuclear power plants, or reservoirs, our power grids, our Pentagon and The White House buildings.   Now…think of whom the F-35 is designed to fight against.  I have no (s’cuse my French) effing idea.  It goes Mach 1.3 ( 1.3 times the speed of sound) which sounds like a lot.  Believe me, it isn’t.  Many of the Soviet MiG fighters beat that speed. 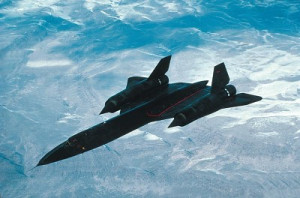 By Comparison,  the SR-71 Blackbird   which flies Mach 3 was designed in the 60s, over half a century ago by Kelly Johnson at Lockheed Martin’s Skunk Works. It took him only 18 months and didn’t cost a trillion dollars.  It didn’t cost billions of dollars either.  It was in the low millions, almost one-thousandth the cost of what we’re messing with now. And Mach 3 is still the fastest interceptor speed today.  How much fat can a congress press into a single war project?  About a trillion.  And that’s money that right this moment, we can’t afford.

The reality is we are still preparing for ultra-expensive hypothetical wars…which will never occur.  We don’t need and we shouldn’t even want autonomous nuclear-equipped bombers which can be hacked by an enemy.   It makes perfect sense from an enemies’ standpoint.  Don’t bother spending 50 billion dollars.  Just hack the weapons the U.S. has created and let us destroy ourselves. 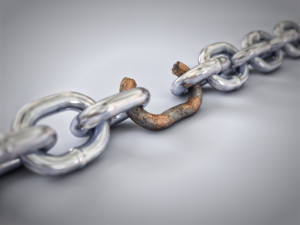 A Chain is Only as Strong as its Weakest Link:  This is an old, old idiom which I happen to use a lot.  It’s strange how many young people have never heard of it and can’t seem to glean the wisdom in it.  It applies to all kinds of things.  I have three brand new tires on my Chevy.  Of course, the fourth one is bald and and leaks air…but I’m sure I’m safe.  Right now, we have sexy high-tech, mega-expensive war machines…that actually don’t work all that well.  Worse than that, they’re designed to fight wars that we haven’t fought for decades.  Why?  $$$$$$$$$$$$$$$. 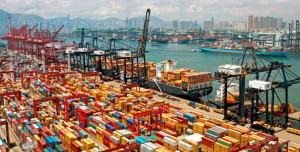 America has a whole slew of weak links:  Thousands of containers are off-loaded to our docks every single day.  How carefully do we check them?  Don’t ask.  Our power grids, our reservoirs, our rail systems, our runways.  One little $200 drone can take out a 747 if the operator is a terrorist…….or just STUPID.  That’s a weak link.  Our automobile manufacturers are setting us up with more and more autonomous vehicles.  Beware.  They can and they will be hacked.  Another weak link.  Most, if not all of these weak links can be solved with very low tech, low cost solutions.  But, they aren’t cool, and don’t look good on the cover of Popular Science.

The most successful attack ever made against Americans on American soil happened during 9-11.  With that attack, a handful of  terrorists with no weapons at all to speak of, took over airliners, and changed the face of warfare.   We still don’t have our act together, though we’re building sexier and sexier and more exciting war toys.  We can’t afford em, will never use them, and hackers can successfully take them away from us and point them back at us.

Worry about AI?  Great stuff for Hollywood movies.  The really scary stuff is right here around us.  Can you make a difference?  Yes.  E-mail your senator.  Call your congressman.  If you can’t do something that costs you nothing but two minutes of time…don’t bitch when you see what’s ahead on the Six O’clock News.

P.S.  For new readers, I’m a product of the 60s, flew fighters during Vietnam and am a loyal American.  That’s the very reason this article is up for you to read.  God Bless America….but wake the hell up.  We’re going down a very dangerous path.

P.P.S.  This just came over the bow this morning:   The USS Gerald R. Ford Supercarrier at a cost of 17 Billion and counting, using a host of un-tried technology.  Check-out this link:

8 Responses to "Don’t Worry About Artificial Intelligence. Worry about…"