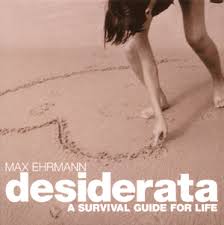 I woke up really early this morning.  Looking now at the bottom right corner of my computer screen it’s still only 3:54 am…and I’ve been up awhile.

The disclaimer to this article is by way of confession.  Though I’ve been a writer for half my life, I’ve always gotten…antsy whenever I’ve had to read or listen to poetry.  It just always seems a bit too concentrated for want of a better term and sometimes the poet goes so over the top that I become embarrassed on their behalf.  Yet there are exceptions: 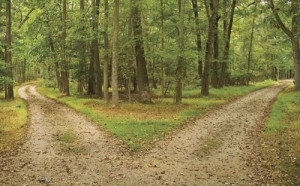 The Road Less Traveled:  Two exceptions: The first, Stopping by Woods, by  Robert Frost.   It was the line, “I took the road less traveled” that blew me away and gave me that extra nudge to, indeed, take a pretty untraveled road.  And yes, it has made all the difference.

Desiderata:  But the second poem, Desiderata, for whatever reasons, got through my barriers…and I have some rather formidable barriers.  I’m printing it below so if you’re an eager beaver you can skip down…though I’d ask you to defer for a minute.   And what prompted all this?  A flash of realization from my Muse, my subconscious if you will, putting things into perspective and crystal clarity.  If you’ve read more than one or two of my articles, you know I come down pretty hard on “stuff”…material things.  After this little flash of perspective I’d like to come down even a little harder.  I can pretty much guarantee that in those last days of your life you won’t be thinking about how big the video screen is on your new BMW, or whether the stock market is up ten points or down.  That’s a gimmie.  You’ll be wondering, “What was it all about?  Who did I love?  Who loved me? Did I leave the world a little bit better…or a little bit worse?”  There’s still time. 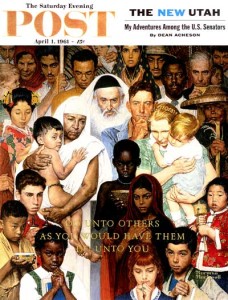 Whatever religion you are or what color, race, gender, or political affiliation, if you look around honestly, things have gotten…a bit nasty lately and it seems to be accelerating.  As superior as we hold ourselves to the animal kingdom ( a questionable premise in itself) I have as yet to witness even a nasty rattlesnake, great white shark or pack of wolves methodically try to wipe out another species.  Most of it is based on eating to survive and feed their young.  Unfortunately we can’t say the same…  Our egos got too engorged, as well as our sense of self-importance and lust for power, sometimes absolute power.

When I first read Desiderata, I took it over to Pamela and plopped it down in front of her.  She read it and said, “…wow”.   I felt so strongly about one of the lines, I cut the words out of plate steel with my torch and placed them around the walls in my studio.  “You are a child of the Universe, no less than the trees and the stars…you have a right to be here.  And whether or not, it is clear to you, no doubt the universe is unfolding…as it should.”     Strangely, it’s so basic that it’s easy to miss the meaning.  If you say, “yeah, so what?” you read too fast.  Even the astrophysicists agree.  Look at your hands, your arms.  They are literally, the same atoms that make up the stars, galaxies.

Graciousness and Class:   The first time I heard the word, Class, defined, it was by John F. Kennedy.  He said simply, Class is grace under pressure.  So simple and yet so elegant.  Class is how you act when everything goes to shit, not when everything is groovy. 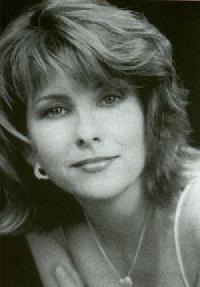 Nancy LaMott:  A short poignant vignette comes to mind.  A number of years ago, we were watching Charles Grodin’s TV show.  He introduced his old friend, a beautiful and highly accomplished singer, Nancy LaMott.  She sang, Moon River with a simple piano accompaniment.  It was amazing, but oddly, she didn’t stay for the usual banter afterwards.  The next day when Grodin’s face flashed on the TV screen he was utterly wiped-out.  Nancy had sung her song, then taken a taxi directly to the hospital where she died two hours later.  Oh, by the way, she married her mate on her death bed.  Grace under pressure?  Good God, let’s try to get some more of that back in our collective lives.

Okay, as promised, I just printed the poem at the bottom:  As a philo major, searcher for truth, sometimes Deist, secular humanist, even occasional atheist, it was and still is for me the single best poem and best advice I would give to anyone, regardless of where their heads are at.  It helps to realize that you are an integral part of the universe.

An interesting side note:  When I was much younger, a 45-rpm single entitled Desiderata came out.  It was read by Les Crane, with some heavy-duty gospel singers behind him.  If you tend to eschew things too sweet, it may be a bit rich for you…easy to dismiss.  But it’s so damned good, I’m gambling on you seeing past that:   https://www.youtube.com/watch?v=2yNJaKF9sXA 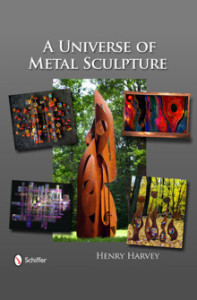 Some Parting Words…  When I was finishing up my last art book, A Universe of Metal Sculpture, that little Muse inside me woke me up way too early as well.  …She can be really annoying at times.  I started writing  Some Parting Words…words which when I’m not around anymore, may be of interest to my grandson…or even my son.  They’re easy to read…sometimes very difficult to live by, but they’re true:  I kicked off with an important one.  Is there overlap with Desiderata?  How could there not be?  There aren’t an infinite number of foundation stones to life.  Judge for yourself.

ONE:  Keep your word. In this complicated world, maintaining the value of your word, and telling the truth has become a rarity. As a man, there will come a time when your word is the only thing you have. Protect this treasure and don’t let it become tarnished.

THREE:  Luck. Yes, it exists…or at least it would seem to. The cliché goes this way: the harder you work, the luckier you get. It’s true, it’s really true.

FOUR:  Be very careful what yardstick you choose to measure success.  Success is not money, for money is an elusive measure and you will never have enough. Neither is fame or success. Fame can be the harshest mistress of all, leaving you without freedom, solitude, or privacy.  And power, in and of itself, is not success, either. Though many would think so, it is said that power corrupts and absolute power corrupts absolutely.  Look around you. Judge for yourself.  Success is finding something in your life that you like to do, and finding a way to do it for your life’s work.  It doesn’t have to be wondrous; it just has to fulfill you. And guess what the definition of happiness is…that’s right, they are the same.

FIVE:  Look for the paradoxes of life. They are always there and knowing this will give you an inkling what to watch out for.  The good things always have some cost to them, though those costs are often difficult to see. Know what those costs are.  Strangely, bad things almost always have a good hidden inside as well, if only in the form of a life lesson.

SIX:  Forgiving. At some point in your life, you will do something that requires forgiveness.  You must be able to forgive yourself, and in learning how to do this, you will learn how to forgive others. There are no perfect people on this planet. And holding a grudge…not forgiving, will ultimately hurt you more than anyone else. For your own sake, live this rule.

SEVEN:  Being careful. There is a time for it, such as in crossing streets and such. But there is a time to go for it, grab your dreams, and hold onto them. You do, indeed, have only one life. Cross those scary bridges. Burn them if you have to. But never be afraid to take a chance. It is the spice of life and it is what we covet in others who have become successful. Don’t come to the end of your life thinking, “gee…I wish…”

EIGHT:  Love. Try not to compromise nor be cynical about love. Wait for the real thing.

Go placidly amid the noise and haste, and remember what peace there may be in silence.
As far as possible without surrender be on good terms with all persons.
Speak your truth quietly and clearly; and listen to others, even the dull and ignorant; they too have their story.
Avoid loud and aggressive persons, they are vexations to the spirit.
If you compare yourself with others, you may become vain and bitter;
for always there will be greater and lesser persons than yourself.

Enjoy your achievements as well as your plans.
Keep interested in your career, however humble; it is a real possession in the changing fortunes of time.
Exercise caution in your business affairs; for the world is full of trickery.
But let this not blind you to what virtue there is; many persons strive for high ideals;
and everywhere life is full of heroism.

Be yourself.
Especially, do not feign affection.
Neither be critical about love; for in the face of all aridity and disenchantment it is as perennial as the grass.

Take kindly the counsel of the years, gracefully surrendering the things of youth.
Nurture strength of spirit to shield you in sudden misfortune. But do not distress yourself with imaginings.
Many fears are born of fatigue and loneliness. Beyond a wholesome discipline, be gentle with yourself.

You are a child of the universe, no less than the trees and the stars;
you have a right to be here.
And whether or not it is clear to you, no doubt the universe is unfolding as it should.

Therefore be at peace with God, whatever you conceive Him to be,
and whatever your labors and aspirations, in the noisy confusion of life keep peace with your soul.
With all its sham, drudgery and broken dreams, it is still a beautiful world. Be careful. Strive to be happy.

13 Responses to "Desiderata…and Some Parting Words"