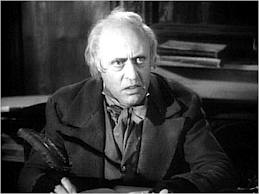 This morning, I was right in the middle of writing a deliciously mean-spirited, snarky, tell-all blog called: ENTITLEMENT: When Too Much is Not Enough.  I was having a grand ole time, but then Pamela chanced to stroll by, saw the monitor and said,  “Henry, not before Christmas.”  She sounded like Mrs. Cratchit in Dickens’ Christmas Carol, as in “Henry…think of the little children.”  And so, I have acquiesced…sort of.  The article below, if only by contrast, should make you feel a whole lot better about  your Christmas decorating. 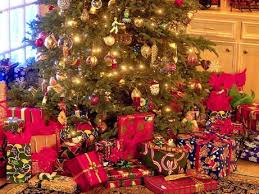 TOYS!!!  What you need to know, in order for this story to make sense, is that way back when, I was originally “The Christmas Kid.”  What kid isn’t?  At age five, and having only a vaguest concept as to the profound religious overtones of Christmas, all I knew was: A big green tree was dragged in with my dad swearing and knocking over lamps and vases as he dragged it through the house.  Then, mom decorated the tree. (In later years, we helped, though not very much.)  And then boxes would appear, hundreds, thousands, perhaps millions of boxes small and large, each elegantly wrapped in Christmassy foil paper with extravagant bows.  Sound familiar?  Sure it does.  Then, at some prearranged moment on the eve, Mom would give us a nod and her three children would begin ripping off all the paper and bows and prying open boxes filled with…TOYS!  It was heaven!  So far, this is textbook stuff. 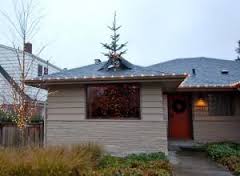 Santa… Much, much later, when my bride and I bought our first house (think of a diminutive brick shoe box), a light bulb lit, only it wasn’t a Christmas light bulb.  It was the realization that, by some highly unfair form of payback magic, I had become Santa Claus, and armed with a pipsqueak budget from the military.  I discovered that real checks actually had to be written to pay for all that stuff which had once been free.  Had to buy a tree! Ornaments!  Presents, even the ones for me had to be paid for by…me.  It was something of a shock, like getting slapped by a half-frozen mackerel…but we adapted. (wife’s note/disclaimer: image above-left wasn’t really our house.  Ours was…a bit different) 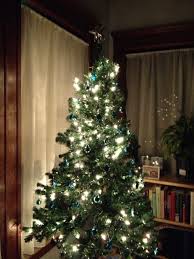 Our first military Christmas was on Yokota AFB, Japan, which was… interesting.  To kick off the season, a note was slipped under everyone’s door with the parameters for how many lights we could put on the tree and for how many hours. (7pm-9pm)  Go past nine and…what?  They take you out and shoot you?  I did learn, however, from families that had been there a while that you could: pull the blinds shut, pull the curtains together and staple them, then duct tape around the sills…just to make sure.  Ho, Ho, Ho and Merry Christmas from Yokota!

Designer   Later, back in the states, I was a budding (read as impoverished) metal sculptor, parlaying my brick shoe box into something bigger… then bigger, and then back east and bigger still.  The starting gun had gone off and I was beginning to realize that houses, cars, and Christmases were no longer just for fun.  It was a game with winners and losers.  Something was brewing in America.  You couldn’t just have a pair of jeans anymore or just a regular ole Christmas tree.  It had to be designer.  Everything designer. 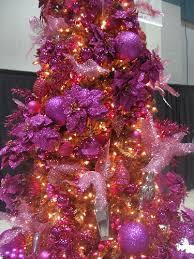 Peachy!  As an artist, I made up for my lack of buying power with a Darwinian use of my creativity.  Some of our gay friends would spend weeks getting their 12-foot metallic-peach colored Christmas tree set up with peach-colored balls, peach bows,  peach lights, tinsel…everything.  It was…PEACHY!   What was worse, Curt, the official Christmas guy, actually used a tape measure to make sure that everything was perfectly distanced, perfectly hung, perfect with regard to depth and alignment.  I hadn’t known that you could miss-align a Christmas ornament.  Still not sure how you do that.

I, of course, adroitly countered, by illuminating our forty-foot outside Scotch pine in the front yard. (You really don’t want to know how I got that first strand up there.)  And then I proceeded to make a small army of reindeer out of logs and branches using a chainsaw and a drill.  I thought they looked pretty neat.  Apparently I was wrong.  Soon after Christmas the small army traipsed one-by-one into the fireplace.  It’s a tough world.

Over the years, the houses got bigger, the driveways longer, and the Christmas competition much more lethal.  Even now, a handful of our friends decorate  everything for Christmas.  Walk up to a front door and Santa Claus comes to life on the porch and starts talking to you…spooky, bordering on scary. 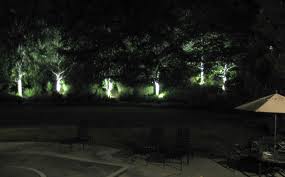 Our ne plus ultra occurred about five years ago.  BIG Christmas Party:  Pulled-out all stops and jumped in with all fours.  We (I) had become what I’d always snickered and thumbed my nose at:  Über Christmas Weenies.  We had gates by then, all wrapped in ribbons, bows, lights and flanked by not one but two Christmas trees.  (And this was before you could even see the house.) Then, my pièce de résistance:  Our driveway twists though the forest and is about 1200 feet long…groovy except when it snows.  I personally went to the hardware store, got 1200 feet of Romex, connectors, lights, reflectors and….light sensors.  It took a good day, but that night… driving through the gates, the first set of spotlights came on, illuminating the trees and the snow, then the next and the next, eight times.  Once you got to the house and looked back, I think we could have fooled some of the 737s  on their downwind approach to Philly International.

Our main Christmas Tree was in the bay window and we also had a teddy bear tree, a cookie tree, boughs, garlands, mistletoe, non-stop Perry Como and Johnny Mathis singing carols.  To steal again from Dickens, twas a long and ponderous chain I had forged.

Show Time:  The first guest to arrive was greeted by exactly what I had planned…a truly grand entrance along our driveway.  The second guest, however, came before the timers had re-sequenced and…it wasn’t quite right.  Following guests would drive up, I’d hold the door and the first sentence was, “Do you know there’s something wrong with your lights?”  This scenario was repeated…oh…fifteen or twenty times.  I reached for my 18 year-old, single-malt Macallan and Pamela quickly deduced what was up.  I was getting annoyed.  “It’s show time,” she whispered in my ear which translated means: shape-up. 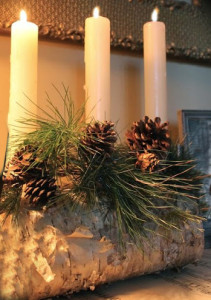 How Far is the Ole Yule Log?  One of our guests had brought us a birch Yule log they had made themselves.  Just what we needed!  Think of a white log three feet long with about ten holes drilled on top and filled with candles.  Then…they hot-glued pine boughs and ribbons to it.  It was pretty-pretty.  In the spirit of Christmas and the party, I lit the candles and put the log on the dining room table as a centerpiece.  Fifteen minutes later, I knew something wasn’t quite right.  For one thing, the dining room was now glowing orange.  The candles had ignited the boughs and there was a significant fire spewing up the dining room table.  Some of my old friends thought it was just another weird Henry idea, but it wasn’t.  About forty people just gazed at the three-foot flames.  Pam ran for the door.  I grabbed the log like a football, ran through the house and did a pretty good football spiral out into the snow.  I think someone even clapped.  Smoke and then steam poured up from the snow. And then, the gal who had made the log came up to me.  Contrite?  Noooooo.  She said,  “I didn’t think you were actually going to light it.”

Scroll ahead to This Christmas:  About two years ago, we broke down and got an artificial tree.  Outwardly I rationalized about ecology and saving trees, but that was baloney.  After killing 45 trees, I got tired of worrying about the prospect of my house burning down, watering the tree and having a flood…plus the $65-$95 a pop for trees in our area.   Sooo… Now I drag a nine foot sorta-real-looking tree inside.  I scooch it up into the same place we always put it and then drag out a big plastic bin filled with 45,000 Christmas ornaments.  Pamela and I pour out some Harvey’s Bristol Cream Sherry to deaden the pain and away we go.

There’s a worn nail hole centered at the entrance to the dining room where I hang the same boughs every year and…we drag down Pamela’s collection of about two hundred pounds of snow globes…each one playing a different song.  Never, ever, ever get frisky and wind them all up at once.  It fills you with the urge to reach for an AK-47. 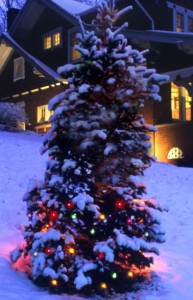 Good Enough…  We got the tree up-and-decorated, drained the bottle of sherry, and then Pamela said, “Aaaaah….we gotta do better than this.”  My knee-jerk though was to say, “Huh?  What?” but I never win disagreements with Pamela (or my Boston terrier, Gigi) and so I just nodded.  We had planted…guess what…another  stupid pine tree close to the house, and right outside our picture window.  It’s gotten big over the years…20, maybe 25 feet tall.  I went down to Delray Hardware to get…still more Christmas lights and started walking them around the tree, getting higher and higher with each revolution.  I got up to around nine feet, about a third of the way up, and ran out of lights and enthusiasm at the same second.  Went back inside (It’s about 15 degrees here) and glared at Pamela.  “Good enough,” she declared.  Only……   Returning from food shopping just now, we pulled within view of the illuminated bottom third of the pine tree and Pamela started giggling.  She said something on the order of, “Have we really sunk this low?”   To which I replied, “Yeah…pretty much.”  At least I made her laugh…

Be Warned: Next week, it’s gonna be down-and-dirty.  Fur will fly.  If you recently got your kid a shiny new BMW M-3 just because….he managed to graduate high school, and you think that was a good idea, best not to tune in.  Anyway…