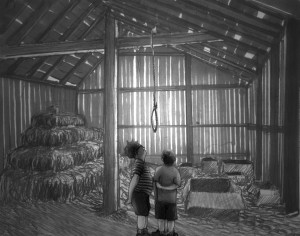 When my son, Cameron,first started school, I gave him a warning.  I said, “if I ever get a call from your teacher about anything, I’m starting with the premise that they are right and you are wrong.   None of this, my-boy-can-do- no-wrong crap.”  We are an anti-nepotism family and notorious for being tough on each other.  It’s in our DNA.The only reason I say this now is this:  Something very unusual is happening.  For years, as Cameron’s illustrating abilities have been growing, about the best praise he’s gotten is, “Okay…I can use this.”  That’s about it.  It’s how we all are.

This morning, however, Cameron brought two illustrations in to work.  Both are for the latest book coming out, entitled Lord of the Mill.  We’d had an in- depth discussion beforehand.  This was (is) going to be a special book and I’d be calling on all his talents to make the illustrations…MAGICAL.  I suggested that we’d probably doing a lot of arm-wrestling on this project.  It’s just really special.  We shook hands knowing what we were getting into.

Well…Cameron did a double slam-dunk this morning.  He’s got a portfolio going-on in this book that I’d put up against anyone out there.  I included one shot in this article though there’s another that depicts Klaatu, a sort of robot talisman, object d’ arte, and Cameron absolutely kicked-ass with it.  The book is drenched in magic and I’m happy to say, Cameron is contributing greatly to it.  And so, without further ado, an interview with this young talented illustrator…my kid, Cameron Harvey by editor Lynn Bolgar.

Lynn Bolgar:  I’m looking at the answers you gave to the Seventeen Question Zen Continuum Test.  I’m not terribly surprised to see Wind in the Willows as your favorite book.

C. Harvey: Yes.  Keep in mind that there’s an asterisk there.   We’re talking about illustrations.  I probably have ten or twenty favorite books.

Lynn B:  Could you expound? What was it about Wind in the Willows that struck you?

C. Harvey: I think it ultimately comes down to one word, Magic.  If an illustration has it, it doesn’t matter how sketchy it is or how crooked or smudged.  And if it doesn’t have that quality…well…game over.  Time to take out a new sheet of paper…or a really big eraser.

Lynn B:  I’m picturing you with a vast arsenal of hundreds of special pencils, charcoals, markers, strange ink pens.

C. Harvey:  I have all of those…and more.  But most of them go unused or rarely used.  I have a handful of special pencils, and equal number of markers and four or five erasers.  The magic isn’t in the pencils……..

Lynn B.  Any other books come to mind as inspiration?
C. Harvey:   Stuart Little.  In the summer, my wife and I still save those wooden Popsicle sticks…just in case we run into Stuart Little.  Oh, and the last scene in that book.  It’s a tiny little mouse-sized car disappearing up a twisty curve in the road.  It was simple, but it was PERFECT.

Lynn B.:  How is it collaborating with another member of the family, or in this case, your father?

C. Harvey:  Well…we both have large art-driven egos so we don’t always see eye-to-eye.  I always try to be true to the scenes he has given me.  Sometimes, believe it or not, I have to battle between being loyal to the words on the page…and the person who wrote them.  That can be a minefield.  But I think in the end, we both know when it’s working…and when it isn’t.

Lynn B:  Okay, for a little fun, I have all your answers for the 17 Zen Continuum Questions and…I see a pattern.

Lynn B:  Yes.  Rich, famous, or powerful.  You go with famous.  If hitting it big meant losing your friends, your answer isn’t yes, it’s Hell, Yes.  When are you happiest?  Your answer is “When I’m in the middle of a project.”

C. Harvey  Guilty, guilty, guilty.  Guilty as charged.  To be in this family is to be a workaholic…and I wouldn’t have it any other way.