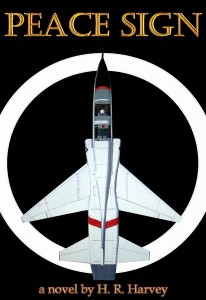 When you finish your first novel, there’s a moment of extreme relief.  You’ll probably get a big hug from your spouse…maybe go out to dinner, get drunk, and toast each other.  But then, there’s the letdown because for the past year or so, you’ve been spending a whole lot of time in a place of your own creation.  Every decision, every detail, everything is on your shoulders and suddenly that’s over with.

Then, someone asks, “What’s the book going to look like?  What’s on the cover? and your little heart goes pitter patter once more.  Truth is, if you’re sending it out to one of the big publishers, they’ll entertain your suggestion, but there’s an understanding that they probably won’t follow it.  However, if you’re going the eBook route or actually self-publishing, the ball is back in your court.  First thing:  You have to be cold-blooded.

What you’re looking at above is the first cover I came up with for the novel, Peace Sign.  In my mind it was (is) a somewhat clever juxtapositioning of a T-38 USAF fighter over a white circle to create…a peace sign.  And I thought (think) the black-and-white contrast was pretty hot as 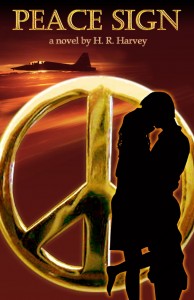 well.  As an aside, when you attempt to get a straight overhead shot of an airplane, you can just about never get one.  Everyone likes to shoot them in a turn or dive.

Google Images was actually no help at all and…what I ended up doing was (you’re not going to believe this) I had to boot-up my Flight Simulator X, take the T-38 Talon out over the ocean for contrast, adjust the trim for level flight and then the computer controls to view it from directly above.  Then I shot a digital of my computer screen.  Honest-to-God.  And, guess what, it came out pretty nicely.

What surprised me, though was that women flocked…away from this book cover.  They far and away preferred the one you currently see for sale.  I like that one too…a lot, but I thought this one was more clever and dramatic.