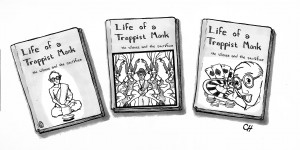 Can You Judge a Book by its Cover?

Should you judge a book by its cover?

Probably not.  Next question.

Does the cover of a book play a role in the probability of its being sold?

Ahhh… This is the 64 dollar question.  The answer is yes, but it’s pretty complicated.  For a best-selling novelist, like some of the literary rock stars, Grisham, Crichton, King, Koontz, Le Carré, and Conroy, committee meetings are held to narrow down the exact cover that’s going to draw the most money.  It’s cold-blooded, but that’s how it is. The other reality is that once an author reaches a certain point of ignition, the embossed-metallic name in 200-point font is probably enough to do the job.

Does that help you any?  No. What’s interesting, however, and a bit heartening is this:  Creating a killer book cover is not a science but an art.  Even the big publishers screw-up.  And little guys can have really cool and really original ideas.  Plus, when every publisher on the planet goes to embossed-metallic 200-point fonts, they tend to cancel each other out. And for a number of writers, say Fannie Flagg,  Amy Tan, Dorothea Benton Frank, or Anne Tyler, the readers would probably grit their teeth and make faces at the prospect of black covers with silver-embossed F-18 Hornets streaking across the front.  Their readers are looking for smaller books (plots), with interesting characters that they can relate to.

The truth of the matter is, book covers are a perfect expression of visual and literary Darwinism.  The moment a prospective buyer wanders into a bookstore, every book cover is singing out,  “Me!   Me!  Pick me!”  Most are drowned out. If you’re a newly-minted writer, the pickings are either non-existent or limited by your own resources and experience.

The way the contract reads, you write the book and…well, that’s pretty much the end of it.  The publisher assumes, and usually wisely so, that they know what they’re doing a helluva lot better than you do.  Usually it’s true.  Usually. If you’re going the eBook route, or self-publishing, you’re in the driver’s seat.  That’s the good news. The bad news is you’re in a high-stakes game and you don’t really know the rules.  Sometimes that helps.

At the time of this writing, I have seventeen books out and seventeen covers.  Some of the covers were done by the publisher, the rest were designed by me with large dollops of  assistance and editing from, Pamela, my partner in crime.  How did we make out compared to the pros?  Several were comparable, one or two questionable, but most are significantly more dynamic, which you can interpret as more likely to sell.

By way of a small confession, I’m writing this particular article at the tail-end of a lost weekend of book-cover alchemy.  And the reason I’m relaying it now is not because we did such a good job.  That doesn’t help you.   It’s that even as professionals, we got completely derailed and with the best of intentions.  We finished a cover. 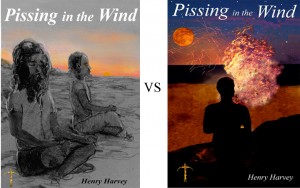 The impetus behind it was a sketch made by my son, Cameron.  The sketch was good, so good, in fact, that I decided to run with it for the book cover.  Cam slaved, making it better and better, but  somewhere along the line, it began to morph into something else.  It happens and we didn’t notice it until it was too late. We regrouped, went back to the basics, and re-finished the cover.  It was still good…pretty darned good.  But something in the back of my mind kept whispering that something wasn’t right.  At four-thirty this morning, I rolled-over and whispered to Pamela, “The cover…” “…yeah?” “ Would you buy the book?” There was a quiet moment and then she sighed, “No.”

We got up, put on the coffee, and we went into a marathon session.  Too many cups of coffee, too many bouts with the PhotoShop pixies, but many hours later…you know when you have it.  It was a battle of wills and of egos.  We won.  You can win if you fight long enough. Other book covers hop onto the screen seemingly by themselves.  Everything just clicks.  One cover, and I won’t tell you which one it is, took all of three minutes to rough-out the concept.  Of course, it took three hours to polish.  Still, that’s really fast. The bottom line is, you have to have your bullshit detector turned-on all the time.  If  there’s that lingering voice in the back of your mind still whispering, “Did we get it?” the answer is, you didn’t.  You have to listen to that voice.

I never pick on underdogs, it’s the way I was raised, but when someone is on the top of the heap and they come out with a D- book, book title, and book cover, it deserves some kind of note, if only to prove that massive amounts of money can’t guarantee success. J.K. Rowling swam upstream with her first Harry Potter Book.  It was turned down by everyone because it was too long.  Well, she laughed last.  Her most current book, however, with all the money of God behind it, is…  I’m embarrassed to admit, I still can’t remember the title, it’s so forgettable. I’m looking it up now.   The Casual Vacancy  just doesn’t pop for me. Nothing comes to mind.  The cover is red with a yellow border and an X in the middle, which sounds better than it looks.  I don’t know what it’s supposed to mean.  Most of the critics actually hated it, hated everything about it.  One admitted she just couldn’t get past 50 pages.  Sooooooo…there’s hope.  (Keep in mind, however, that even with Ms. Rowling’s flop, she probably made more than any of us will earn from all our books.)

I always liked, The Road Less Traveled excerpted from Sandburg’s poem for M. Scott Peck’s book.  Gone With the Wind, To Kill a Mockingbird, Interview with a Vampire, Atlas Shrugged, The Agony and the Ecstasy, even Jaws.  These are titles, which if nothing else, you can probably remember for a day or so. The title counts.  The cover counts.  The back cover counts, too.  But you know what counts the most?  The first sentence…followed by the first paragraph, followed by that first page (which should be kinda short).  Hook me in that first paragraph.  But woo me with you great title and cover.