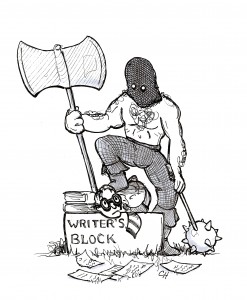 I’m guessing that this is going to be the shortest, harshest,  most unlikeable of my articles.  It’s just has to be that way and it’s not because I’m insensitive or lacking in  empathy.  It’s because I have been there and I believe I know what I’m talking about.  Perhaps not, but bear with me.  Let’s start with the harshest, shortest question and answer.

What is writer’s block?

Okay, you didn’t like that one.  Let’s take it one step warmer and fuzzier.

That’s still pretty nasty.  Let me try to soften it up a bit until you can swallow it.

What is writer’s block?

Writer’s block is your inner mind telling you that you’re not quite ready to put down the thoughts that are in your mind.

Here’s the deal:  When a prima ballerina goes on stage for her first solo, she doesn’t stop and say, “Excuse me but I have dancer’s block.  Could ya’ll come back next year?  Bring out the tomatoes and she’d deserve them.  Same with an opera star. Same with a rock star.  Either you’re pro…or you ain’t.

You don’t see an Indy car racing driver return to the pits saying, “I’m not feeling good about things.” Or…how about the pilot in the cockpit of your flight to Heathrow?  Not up to it?

Writers should not be accorded anything that any other pro doesn’t get.  If you crash and burn at page eighty-five, it’s not because the myth of writer’s block has befallen you.  That’s crap.  It’s because you either don’t know where you are, or you don’t know where you’re going…and that part is up to you.

How do you get over it?  How do you get past it?  Suck it up, glare at the screen and write something.  I mean it.  Have your character, flip-out and start beating his head against the wall. Have him call his girlfriend or climb out on the ledge.  It’ll probably be wrong, but at least that’ll give you a clue as to where the right direction might be.

Pros don’t have writer’s block.  Don’t ever ever use that as an excuse.