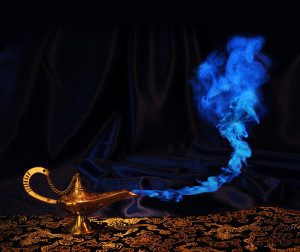 It’s 3:14 in the morning and once again I’ve been rudely awakened by my Muse, who right this moment is dictating some pretty serious stuff.  I’m getting it down; the editing will have to come later.

The Back Story: Last week I wrote an article which predicted where we (America) will be in three to five years regarding drones and UAVs (unmanned aerial vehicles). The responses we received were fascinating, sometimes heartening and sometimes scary.  I had expected more men to respond because of the nature of the beast.  I was wrong.   These drones, UAVs, and quadcopters are here to stay.  Last week I merely extrapolated a handful of the amazing cool and good things they can do or will soon be able to do.  This week, it’s a little different.

The Dark Side:  I’ve been asked a lot this week to deliver to you my projections of the  other side of the story…the dark side.   As a typical guy with a robust ego, it was and is flattering as well as tempting to share some of the conclusions that quickly pop up.  I sat down and within four hours, my mind had conjured up not one or two, but several dozen doable extrapolations for what could be darkly accomplished by UAVs and E-BUGs (my term now for a scary subset of lethal electronic micro creatures).   Am I going to deliver to you a menu of these clever and simultaneously hideous  creations?  You’ll see by the end of this article. 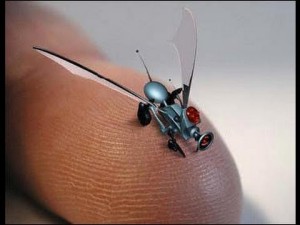 “But First”:  Here’s something I  touched on a while back.  You might find the background interesting.   Nearly 30 years ago an intelligent gentleman by the name of Eric Drexler wrote a book entitled:  The Coming Era of Nanotechnology.  It was heavy on the physics and math equations, yet at the same time, utterly fascinating.  I hunkered down and decided to learn for myself about Nanotechnology.

It’s all around you, in your cell phone, the laser and computer systems in your car and all your electronic devices…as well as some more that you might not want to know about.   I soon began writing the novel entitled, Infestation, which chronicles an era which is just now giving birth.  In the novel, was a cadre of  very nasty beetles, bugs, flying and crawling insects. In varying ways they each used nanotechnology.  Much of the extrapolated technology still hasn’t come to pass.  The most villainous of the creatures were the Tiger Beetle, sort of a nano-tech kamikaze creature…and a truly scary praying mantis with AI, artificial intelligence.  The book was  ahead of its time, and some of the things I had come up with, caused me to put it back in my desk drawer, lest these creatures come about even sooner.  …In retrospect, it was a good call.

And now, I’m getting invitations around the country to predict where UAVs and E-Bugs will be…three, five, and ten years from now.  The more you engage the topic, the scarier it gets and ethical questions immediately arise:  Do we publish ideas that have potential for even layman to do incredible damage?  I don’t think so.  Every so often I’ll see an article or see a video showing how any ole person can make: a fertilizer bomb, a flour bomb,  homemade napalm, poison gas, cop-killer bullets, homemade hand grenades and I wonder aloud:  “Are you absolutely insane???” 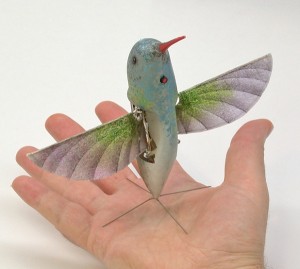 Not to go too X-Files on you, but I would fully expect some gentlemen from the CIA and/or the FBI to be knocking on my door to have “a little talk”.  And it would be appropriate.  What I would say, however, is this:  As much as you are worried about drones invading your privacy by some idiot or neighbor, you really haven’t grasped the danger here.  I think I’m safe in saying, however much the CIA and/or FBI thinks it’s on top of the problem…it isn’t.  It needs to begin instantaneously to explore counter-measures to attacks from without…and within.  Take one agency, say something DARPA-esque that wanted to foment a coup d’etat either within our own government or against another, and it would be difficult if not impossible to stop.  We need the very best of the very best minds on this and basically in two teams:  one to come up with the hideously innovative ideas and, one to effectively counter them.

And so…on that happy note, I am not going to divulge to everyone, young and old, who has the ability to read, what can be done, right now, today with UAVs and E-bugs.  What I will do, and it’s equally fascinating, is take an exit onto a more positive course: one that protects lives and helps to insure  the safety, not the downfall of our country.

Last week, I gave you a small handful of EXTRAPOLATED SCENARIOS.  In other words, from this sentence on, none of this exists…today, though it could within a year or three.  Ready? 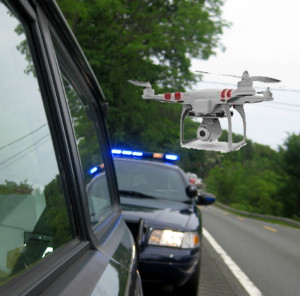 A Speeding Ticket in Bucks County, PA:   Sergeant Jeremy Hunt of the Buckingham Police had a chance to use DJI’s HALO-P (HALO is an acronym for Highly Adaptable Light Omni Copter).  The “P” stands for Police version.  But first, a show of hands:  How many of you have tuned into the reality cop shows showing actual footage of policemen approaching an auto they’ve pulled over?  Does it always go well?  No, it does not, a fact which is in the back of every police officer’s mind as he climbs out of his black-and-white.

Sergeant Hunt was no different, when he contemplated climbing out of his car on Rt. 202 in front of None Such Farms.  The car he had pulled over was a new Audi A-7, but when he ran a check on the plates…things didn’t look right.  He radioed in and spoke with police Chief Daniels…who suggested it might be “fun” to fire up their new HALO-P toy that they’d been training on.

From sixty yards back, Sergeant Hunt launched HALO-P which is equipped with a live  high definition camera feed , an exterior speaker and microphone to communicate…and a small slotted tray for the driver to insert his license into.  All went very well, right by the book and HALO-P arrived at the driver’s side window. As the window began to lower, Sergeant Hunt began his cheerful greeting as he always did, but in the next second, there was a loud boom as HALO-P was blown into tiny pieces by a 12-gauge shotgun.  Interestingly, the live feed was able to capture the faces of the two individuals inside before being destroyed.  At a road block on the Delaware Bridge to New Jersey, that same Audi 7 was brought to a more serious stop and…Sergeant Hunt’s wife was very, very happy that night. 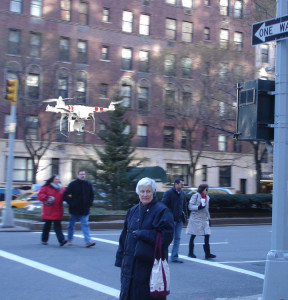 Like it or not, Big Brother isn’t just watching you anymore, he’s watching…and if he thinks you may be in trouble, he’ll follow you down that dark street to make sure you’re safe.

As of 6 am this morning, NYC has turned the key on a new active surveillance system.  Essentially, while there are already eight stationary video cams on every corner, there is also one HALO-PP (Pedestrian Protector).  HALO-PP is keyed to all eight video cams on that designated corner.  It sees all that they see, but…when it spots a pick-pocket, a person being mugged, or even what looks like a fight about to break out,  it instantly contacts NYPD with a live camera feed, as it comes to a hover approximately eight feet over the perpetrator’s head.  Yes, it is equipped with speakers and microphones and is “voiced” by the police officer in charge.  Is it set up to shoot or stun or act aggressively?  No.  It is a watcher and a chronicler…and a protector.

Manhattanites are split on their opinions.  “It’s…kinda unnerving thinking you might be followed by one of these things,” said Clara Phillips on the street, “but…on the other hand, it’s kinda nice to know that I’m probably not gonna get raped or mugged.  It’s a trade-off.”

Camden Elementary School, Camden, New Jersey:  “Sometimes it just feels like my kids are in a war zone,” vice principal Joseph Vinturelli said in an interview this morning.  “Oh, we have chain-link fences and barbed wire on top of the chain link.  But then, people have to be able to get in and out, so it’s almost pointless sometimes.  If a druggie or a perv or a gang wants to slip in, they can do it in a heartbeat and it’s like wolves in the sheep pen.  The funny thing is, they’re so brazen about it.  You can walk right up to them at the chain link and they just stand there, grinning at you, challenging you.”  That quote was made one month ago. 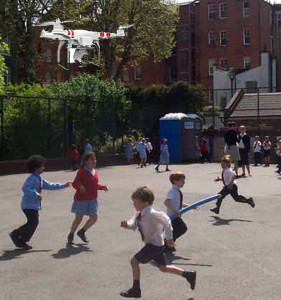 Last week, however, the city of Camden installed its first HALO system.  Camden Elementary is a large school and they parse the HALO units according to square footage.  “We actually have nine units, eight for the main area and one dedicated to a small area where they keep the dumpsters and playground equipment.”

“The first thing I noticed,” said vice principal Vinturelli, “is people outside the fence don’t like these things…at all.  Maybe it’s like cockroaches don’t like bright lights, but these guys don’t like being video-taped.  They drift off and they stay away.  It’s nice…really nice.  1000 percent better and…I don’t have to pay eight people to walk around and do the job…which can be its own problem.”

“What we didn’t figure on though, was the job they do inside the chain link.  We’re getting zero bullying, and so far, zero fights.  On the plus side, one of our students who’s a diabetic was discovered even before she actually had a seizure.  The HALO video cam spotted unusual movement in the girl and alerted the monitors inside.  Within 30 seconds our school nurse was out there, and she even knew to take an insulin shot with her.  This is about as good as it gets.”

“The GREAT thing about the HALO system though?  There’s essentially no overhead and relatively speaking these units cost nothing compared to the good they do.  Yeah, Big Brother may be here, but he’s one of the good guys and he’s making sure your kid isn’t gonna get hurt.  I’m guessing this is gonna cut down on the copycat Columbine sort of bull, too.”

Yup, these were all extrapolations, glimpses into a strange and unfolding future.  UAVs and E-Bugs can be monstrous beyond your wildest imaginings and…UAVs and E-Bugs, with the correct programming, are also the solution.  White-Hat Technology vying with Black-Hat Technology.  It’s here.  We need to address it. 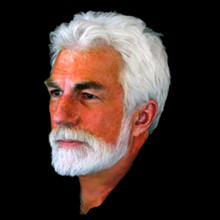 P.S.  My own experience with UAVs via my Phantom 2 Vision continues to blossom.  It’s hard for me to imagine what I’ll be able to do…just six months from now.  It’s already amazing, fun, and sometimes very challenging…mainly because it cost almost as much as my first car…way back when.   If I were sixteen, I’d probably be a lot braver…and be buying heaps of replacement parts.  The older you get the more you really hate making mistakes.  C’est la vie…C’est la guerre.

6 Responses to "The Genie is Out of the Bottle…"