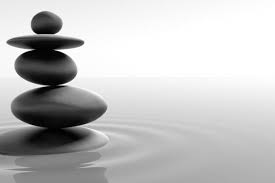 First semester at Franklin and Marshall and I was just beginning to dip my toe in the pre-Socratic philosophers, which sounds really dry…and really isn’t.  The first hour we launched into Zeno’s Paradoxes (490 B.C.) which, by the way supplied the seed for what we now call Quantum Mechanics (1900s AD) …Strange.

After class I meandered over to the college bookstore, wandered into the philo section and noticed a book entitled:  Zen Humor.  I picked it up and started flipping through. Professor Roth had just wandered into the store, noticed what I was reading, and saw me chuckling.  Then and there, I had what was to be my first moment of Zen.  My professor was anything but what you’d expect: Short brick of a man,  tough-as-nails, ex-Marine.  I held up the book and looked question marks at him.  He said, “Buy it.  It’ll give you some laughs.  And… it might change your life.”  Well, sonofagun, it did both, but if you think I’m here to proselytize about Zen, you’re 180 degrees off.   Let’s kick off with a few lame Zen jokes to break the ice and then we’ll talk: 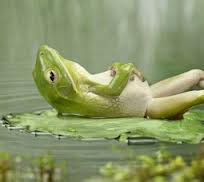 Sex is like air.  It’s not important unless you aren’t getting any.

Never test the depth of the water with both feet.

It may be that your sole purpose in life is simply to serve as a warning to others.

If you tell the truth, you don’t have anything to remember.

Experience is something you don’t get until just after you need it.

Question: Okay, Henry, what the HELL kind of whacko religion is it that tells lame Shecky Greene jokes?

Answer:  It’s not a whacko religion, it’s a whacko philosophy.  That’s an important distinction, by the way… and “whacko” is a relative word.  More importantly, Zen is a mindset that is brave enough to do several things:  It can conceive of some things in life as being absurd, sometimes to the point of hilarity.  And it can conceive of that fact that it can be in error.  More about that later.

A common sense thought I lean on sometimes:  Life is a bugger.  You’d better learn how to laugh, or you’ll be spending a whole lot of time crying. 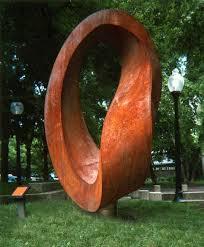 The Zen Paradox: If you don’t know about Zen Paradox you are in for a treat!  It’s so simple it’s easily misunderstood.  It addresses the fascinating reality that most things in life exist as an amalgam of opposites.  For instance, you can’t have hot without the concept of cold, good without the concept of evil, light without dark, positive current without negative, smart without ignorant, and so on, ad infinitum.

( Pictured is a Moebius Strip, which is a fascinating Zen contradiction in itself.  Check it out sometime. With a half-twist of a strip of paper, you create the absurd.)

The Zen Paradox isn’t content to just state the obvious.  It is a Geiger counter of sorts.  Behold a stand-up comedian and scratch around to see why he or she wants to make people laugh.  It might surprise you.  Then look at the most arrogant, pompous ass you’ve ever met…and  peer behind the curtain.  You’ll see someone who is hideously insecure, either overtly or covertly.   Look at someone who proclaims:  “I have THE answer and it is the ONLY answer,” and you just might find someone with no answers at all. (To be fair, having no answers is a highly desirable state in Zen philosophy.)

I Could be Wrong:  How many times have you sat down at a table with someone and after five or ten minutes you realized that they have the single definitive answer to something?   It can manifest itself at any level:  “I’m a FORD man, always been a Ford man, and I’ll die a Ford Man.  Chevys…well they just suck.”  And there are Chevy Guys, too.  Hard to talk cars with them, but that’s at an innocuous level.  Then there are the, “Well, those Italians are just (fill in the blank) Dem Irish people (fill in the blank)  Democrats are… Republicans are just…  Those blacks…  Southerners, goddamn liberals…they’re all a bunch of…”

Wouldn’t it be nice if just once, when you came upon one of the above categories which tightens your particular shorts, the person said instead, “But……..it occurs to me that I could just possibly be wrong on one or two of those facts.”  Voila!  Suddenly there’s hope.  There’s a light at the end of the tunnel.  Zen philosophy covets that hope and that possibility, mostly through its sense of humor and self-deprecation.  It realizes that truth is an on-going, never-ending process.  You can have a Zen Jew.  You can have a Zen Episcopal.  Can you have a Zen atheist?  Sure.  It’s a process, not a set of hard-fast, written-in-stone mandates. 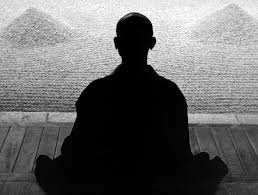 An Onion:   Flashing back to an early philo course, we set about to prove beyond any shadow of a doubt…whatsoever, that God, finally and truly and really does exist.  We accomplished that…didn’t even take very long, maybe forty minutes.  At the end of class, the prof said, “Okay…  For tomorrow, read chapters 7-12 because…we’re going to disprove  everything we proved today.”   Not to keep you in suspense, it was pretty easy.  But then, we had about twenty minutes left and we proceeded to disprove our disproval.  It went on and on.  Days spent pursuing the logic, the facts, the spirit, every argument, looking at them from both sides.  Finally….  Finally…  someone protested:  He said essentially, “Okay, we get it.  Truth is like an onion.  You just keep peeling off layers.”  “That’s exactly right”, professor Mike Roth said.  “But what happens when you get to the end?” the student asked.  Mike replied, “Don’t worry.  You won’t.”  He had spent a good bit of time…over a week, making this simple point.  Pursuing truth is a process of asking questions…deeper and deeper questions.  Just having answers…isn’t THE answer. 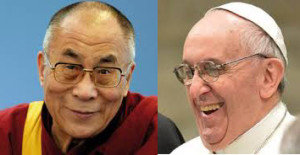 Pope Francis and The Dalai Lama:  Despite all the usual nasty, dark, depressing news in the world lately, there’s also something wonderful happening.  At least it appears that way and that’s an important start.  The Roman Catholic Church which currently has over a billion strong, world wide, has a charming and completely fascinating new Pope!!!

The PEOPLE got the message instantly.  (The Curia, possibly not quite so fast.)

The PEOPLE listened and they heard  humanity.

The PEOPLE listened and they heard humility.

What the PEOPLE did not hear was, hubris, which is particularly refreshing.

Possibly most important of all:  They heard for the first time in a long time…a deep and profound sense of humor about life, the need to include rather than exclude, to realize that we are all sinners in some way.  My mind immediately flashed to the Dalai Lama’s words of enlightenment, shared moments of wisdom, almost always followed by a deep resonant belly-laugh.  I am waiting eagerly for the moment at which these two humble shepherds get together to compare notes…and perhaps laugh a little.  You have to laugh, lest you end up crying.  Right now, perhaps for the first time in ages, there is Hope.  Let’s really try not to screw it up.

P.S.  The teachings of Buddha… and the teachings of Jesus Christ.  Pretty similar?  No, not really.  They are virtually identical, only about 600 years apart…give or take.  How can that be???  That, my friend, is your Moment of Zen and something for you to figure out for yourself.

If you’d like to learn a bit more about Zen, please, by all means, don’t write.  If, however, you’d like to throw some psychic spit-balls…love to hear from you!

Who looks outside, dreams.  Who looks within, awakens.  Carl Jung

Beauty is not in the face; beauty is a light in the heart.

3 Responses to "Your Moment of Zen…"