Ask someone under forty what “engaging” means, and you’ll either get: “It’s what couples used to do before they got married”  OR  “It’s something you used to do in a car with a thing called a clutch…or something.”

Well, there’s a third definition, and by the time you finish this blog, you will have an extremely potent new tool in ways which you may not have thought of.  Promise…

BTW: I believe in the WWII concept of three-on-a-match, I needed a breather from all the intense politics.  You just might need one, too.  I wanted a topic that was universal, with a pinch of humor, an ingredient that often saves my ass, plus something that is rarely if ever talked about. 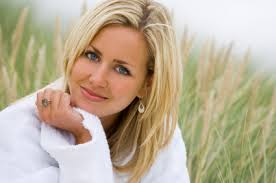 EYE CONTACT:  THE MOST POWERFUL FORM OF NON-VERBAL COMMUNICATION

Here’s a truly easy one.  Yes, this is the image you’re expecting.  A beautiful woman, head tilted, chin on palm, but most important of all, she is looking at YOU and no one else.  Does this work?  Do ducks quack?  Do muskrats guard their musk?  Of course it works and it will always work.  In this mode, it’s called FLIRTING when you do it with the opposite sex.

If you think past the flirting, however, what she is actually doing is engaging you with her stare.  I chose this example carefully out of about a hundred pix where the gal was just posing for the camera.  Look closely.  It’s that look, not just a pose…and that’s what it’s all about.   Thankfully, you don’t have to be blonde or pretty…or handsome or skinny to accomplish this.

The gal, plus the wolves in this picture all know how to engage. The alternative is a truly large patch of red snow.

But there are myriad variations of engaging, among animals, among football fans, etc. etc. etc.  You could just as easily call it tail-wagging and, I’m pretty sure we’d all get along better if we had tails and could just keep our mouths shut sometimes.  Wolves in the wild learned this 10,000 years ago.  Sometimes you gotta wag your tail or end up dead. 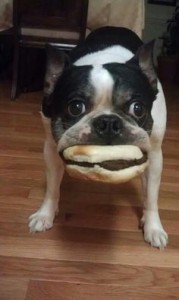 Well…now.  How did this get in my mouth?  Let me think a minute.

That’s a big part of what this article is about… and from here on (with one exception) I’m going to use animals to make my points.  Why?  Because they are sooo good at it, in many ways much better than we humans.  With no sophisticated language to fall back on, they have to be good at engaging just for survival.

Believe it or not, this is a look that I’ve attempted to master over the years.  It’s what I use at 3 in the morning when Pam comes into the kitchen and catches me with the last spoonfull of chocolate chip cookie dough ice cream.  Or…a customer drops in and asks how their custom sculpture is coming along.  Uhmmm…  Or… at a dinner party where I’ve succeeded in pretending I’ve read War and Peace, but then someone asks a question.   The point is: If you adopt pretty much this exact look, you just might live to fight another day.

Driving your 4000 lb. machine of Death.   (Keep in mind, the other guy has one, too!)  So, when one of you screws up as it inevitably happens, what means of communication are available to you?  You can lean on the horn, that’s sure to mollify them.  Or, you can give them the finger, which is certain to make everything better. I believe giving-the-finger was invented in 1951 during rush hour in New Jersey. 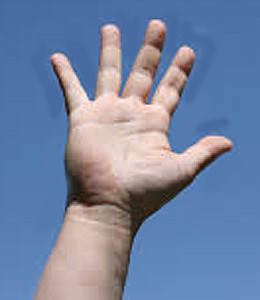 Not every interaction on the road calls for The Finger. Here’s one you might learn. It means: SORRY!!!

At present, I suggest that we might come up with something other than “go fuck yourself” to the guy in the dual axle Chevy pick-up.  Seriously.  How many times have you observed the guy in front or in back of you screw up royally and the only thing they can think to do is give you the finger?   Here’s my suggestion for a new universal sign (thus doubling our means of communication).  Instead of the finger, hit the window button and raise your left arm high in the air with fingers spread.  It’s sort of like half of a “Hands-up!” It will mean one thing:  “SORRY!!!  I SCREWED UP!”  or at the very least, “No Fight, Man!”  This one could actually save your life.

One Small Thing You Can Do to Drastically Improve Your Happiness on this Planet: As warm-blooded fuzzy creatures, we still look to the eyes to see if the wolf, bear, cheetah, groundhog in front of us is friend or foe.  When I look …AT someone, I’m telling them that they don’t even register.  When I look exactly into their eyes…and twinkle…(that’s a term that needs explaining), I am saying something drastically different.  These two gentlemen are masters of this art.  What’s it good for?  Well, all three of us know it’s the best thing in the world for business.  I wouldn’t have survived 50 years selling things that no one needs. 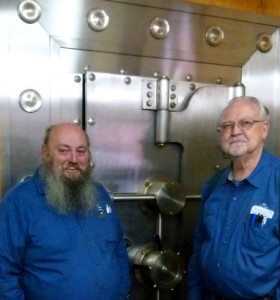 On the right, Frank “Butch”, owner of Gibbs Hardware Store, Old Fort, NC. On the left, Butch’s right-hand man, Mike. Notice the safe in the middle.

The very first time I entered what is  the best hardware store I’ve ever entered, as a newbie and a former Yankee, they sized me up and I sized them up.  Then I gazed at the eighteen-foot-tall steel safe behind them and said, “You guys are makin’ waaay too much money.”

There was a long moment and then the laughter began.  As they said in Casablanca, it was the beginning of a beautiful friendship.  I’m there about every day or so.  They’ve got the advice, the goods, and, half an hour in there beats the crap out of any cocktail party I’ve been to.  Yeah, twinkling, tail-wagging, engaging, and laughing make your life much, much, much better.  You actually can mix business with pleasure and these gentleman are the masters of that. 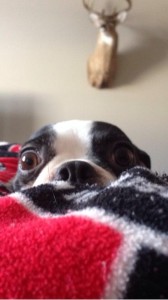 You may have to practice making your eyes look like this…but it’s possible. “Remember your car keys? Well, the garbage disposal was on and…”

SHAME:  Seems like no one even remembers what the word means anymore.  We have replaced shame and, “Wow, I am soooo sorry” with getting pissed-off.  This doesn’t work and it isn’t logical.  If you screw up, apologize profusely and immediately.  All three of my pups know this instinctively.  If they accidentally nip me in the process of receiving a biscuit, the kisses begin and the tails wag until they know that…”we’re cool again.”  People could and should learn from this.  Sometimes profuse apologies are in order.  Sometimes it’s just the right, and only thing to do.  Strangely, apologizing and accepting responsibility for your actions is so rare, that people don’t know what to say.  My pups have got a maneuver down pat for this.  They can crawl on their bellies, feet outstretched like a bear rug…sorrowful eyes…and tails wagging.  I’m not sure how they do this.

FWIW:  I’d love to hear how YOU my readers engage… 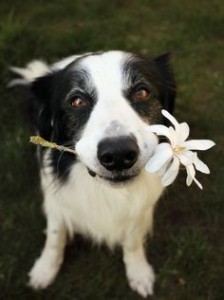 Men and Flirting:  It’s no big secret.  By the first day of  kindergarten at Budd Lake School, I had discovered GIRLS.  The next 20 years or so I spent trying to figure them out.  To do this successfully is really complicated.  As a gawky kid and teenager, I relied on trying to look bright, charming and funny.  The Funny part works better than everything else.  I found, however, that I had two speeds of flirting which actually show up best with these two pictures.  The first one was more, “Hey…Goldfinger is playing at The Strand.  Could I take you out?  You like pizza?  I’m gonna wash my Chevy, too.  Do any of those sound good???”

Later, I learned to shut up a bit and just let my eyes do the talking.  They said, “WOW!  You have the prettiest eyes I’ve ever seen!”  With girls it always began with the eyes…and the look.  For what it’s worth, Pamela was the trifecta for me.  Huge brown eyes that look directly at you, a look of someone I wanted to protect…forever, and a great body.  Yup, it’s just a dachshund you’re looking at, but he best describes what was in my mind.

P.S.  With a little practice, you can “twinkle,” wag your tail, engage, flirt and discover your fellow man and woman.  The whole key is to look at THEM, really LISTEN, really ENGAGE…THEM.  It’s becoming more and more rare.

11 Responses to "The Art of Engaging"