In the years I’ve been writing these articles, there have been a scant handful that have begun: “It’s 4:30 in the morning and my Muse just woke me up with a concept.”  Today is another one of those articles. 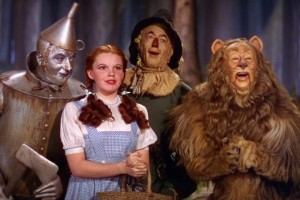 I just woke up from the wildest, most colorful, happiest dream I’ve ever had and to paraphrase from Dorothy waking up at the end of The Wizard of Oz, “You were in it, and you and you and you”  a big handful of high school friends, a couple of college, and, interestingly, a bunch of new friends from Old Fort, NC where we are having a mind-blowing third chapter in our lives.

But first:  A tiny disclaimer:  It’s no secret, at least for us that the past year has been a bitch politically and nationally.  Whatever your political persuasion, I think you’ll agree that things aren’t so nice right now.  Nobody is happy with what is going on.  Nobody.  And I’m hoping America will collectively wake up from the hangover and decide to return to start communicating and just getting along civily with each other.  Now to the dream: 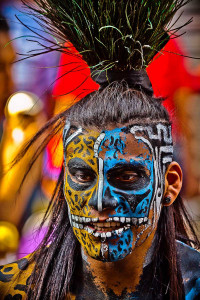 Pam and I had thrown a party…and it started out like a typical party, with about ten or twenty different conversations going on in small clots around the house and property…only no one was all that happy.  It was kinda uptight and I’d just had enough.  Somewhere in the middle of the malaise, I remember reaching into a bowl of some kind of purple mush on the dining room table and I began painting it on my face like a Cherokee warrior: Big diagonal slash marks down my face, Black rings around my eyes.  At first, no one said anything.  A couple of my high school friends (who were their real age, not teenagers) blanched a bit. (Did Henry finally flip out?)  But then, a guy named Mike from the hardware store down here, began coloring his beard with colored chalk and cackling.  Pretty soon, the little clots of people were “doin’ their thing” as we used to say. 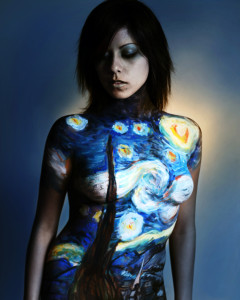 Pamela, who still has an award-winning “rack” had found her blouse suddenly unnecessary and was making a lavender face on the front and spirals spreading out from her boobs.  Her hair, which she actually is growing out to silver, was in a flapper-style and she had lavender peacock feathers curling around into sort of a feathery cloche flapper hat.

And then things began to get really colorful.  We still have four or five big walls that haven’t been faux painted yet and what was interesting was several generations were painting together.  The little kids were at knee-height level painting cartoon animals and there were some hippy-clad couples doing superb artwork  up toward the ceiling.  Think of Van Gogh’s Starry Night.

Strangely, it was a long dream, and colorful as hell.  A gal named Debbie from down the street was cooking angel hair pasta, coloring it in Monet colors and then working it into another gal’s hair.  There were pasta seashell earrings and necklaces and at some point all the guys were colorful painted warriors from strange tribes.  Everyone was getting along. 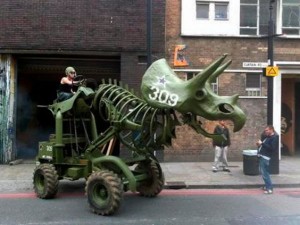 Outside, four or five guys had decided that my big Kubota Tractor was actually a Triceratops dinosaur.  The bucket had big white teeth and…well, it was all pretty weird.

The music changed, too.  Every room had a different theme.  Beach Boys in one room, Amy Winehouse in another,  The Band fighting it out with David Bowie in still another.

Observations:  Well, Pam’s boobs were remarkable, but what was even more remarkable was that across all the generations, everybody was getting along in a sort of Wood Stockian manner, only drastically more color, art, and no pissing on the rose bushes and rhododendruns.  (Remind me to spell-check the rhodys).

At some point, (my dream, my party)  I yelled out for everybody to just stop for a second and look around.  The house had not been trashed.  The artwork was really good…really, really good and I noticed that everybody was smiling, even across generations.  Yeah, it was a happy dream, the face and body painting spectacular for both men and women.  In the dream I commented…to myself and to a couple friends that things have just gotten waaay too up- tight,  there wasn’t a time or place to be a little kid anymore and I asked the group, “Is there anybody here who isn’t still a little kid?”  They yelled back “NOOOOO!!!!”

Yeah, it was a dream.  I know that.  I’m….a grown-up…and a big whooptie-doo on that.  Collectively, we haven’t done all that well at being grownups.

FWIW and this is true, just yesterday, I Googled where I could take my Kubota to get it serviced.  Turns out, it’s a place on the Catawba River about a mile from my house.  Drove it down and met the guy, half-expecting a good ole boy type of confrontation.  That didn’t happen.  I got a tour of the place where this mature tractor mechanic also makes sculptures in the back. 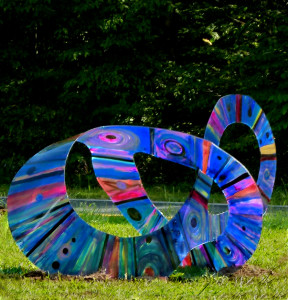 “Through the Wormhole” Our latest big outdoor sculpture at the entrance to Dragonfly.  It’s constructed of bulletproof glass

Already, half his little teeny town in NC has stopped by the house and very graciously asked permission to look at the sculptures and time machines.  Tis a strange town, and one that’s generated this dream.

Conclusions to offer?  Well…  Body painting is fun.  Edible body painting perhaps even more so.  But the big point sung so well by Eric Idle,  have some fun, let the kid inside you out of the cage.  “It’s your last chance anyhow.  Always look on the bright side of life.  Just before you draw your…”  I bet you know the last two words.  I say this to old friends as well as my new weird, shiny ones. 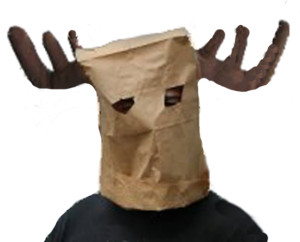