One  week ago I closed my essay with a cautionary metaphor.  It began: “Did you ever get a bad tank of gas?” and proceeded to show how what you read, what you watch, what you listen to is very analogous to tanking up your car.  It’s really important.  If you…or your kid’s reading diet is misogynistic, cruel, biased or just without any merit whatsoever, you will soon see the results of this.  They aren’t pretty.  Please be mindful of what you “feed” your brain and your loved ones’ brains.

This week we’re still talking about feeding your brain…BUT… in this case we’ve traded our metaphor for stark reality.  We’re talking about what food best powers your actual, physical brain, that  3-pound lump of grey tofutti  between your ears. 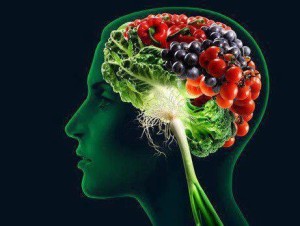 Your brain needs feeding…serious thoughtful feeding and I can guarantee you that no matter how much you  think  you know about what to eat, you’ll pick up some valuable info in the next three minutes.  No, not from me but from the author of a superb new book entitled: Brain Fuel (Recipes to Make your Brain Work Better) by Sam Anderson who has devoted one decade to studying this topic very deeply.  Sam is a gal, by the way and a pretty savvy one. 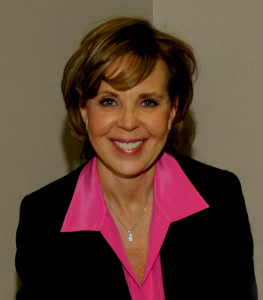 Let’s jump in and do some thrashing around, but for one last disclaimer, allow me to say that Pamela and I both eat very healthily.  We know about Omega 3.  We know about saturated fats.  We drink Kefir, buy wild caught salmon, use olive oil vs. margarine and……..the point of the disclaimer is that Pam and I were absolutely sure we had little or nothing  more we needed to learn.  We…were…wrong.  For your sake, gamble a few minutes to check out what Sam (her given name is Liess) has learned for our benefit.   Let’s kick off with a couple of questions for Liess:

Where are we most getting snookered at the food store? 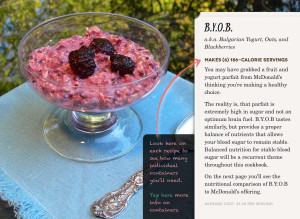 Sam: Many people think if it’s labeled  natural, organic or  vegetarian it’s automatically healthy.  It blows my mind that some people think that fat free is still a good thing; typically anything fat free is loaded with extra sugar and/or salt. (A great read on that topic is the book “Salt, Sugar, Fat” by Michel Moss.) “Healthy” frozen dinners that you microwave in their plastic containers; skim and fat-free milk; fake spreads like “I Can’t Believe It’s Not Butter”.  Despite telling my in-laws on numerous occasions that it’s OK for them to eat real butter, I still find tubs of that crap in their fridge. (click image to enlarge)

Question for Pamela:  Regarding the plastic containers that we microwave…How serious is it?

Pamela:  Plastic containers contain Bisphenol A  BPA  a chemical that mimics estrogen in our bodies.  According to Scientific American they promote breast cancer and low sperm count…and that’s just what they know so far.   Clearly, we’re often in a hostile environment with large corporations creating food that’s easy, and simple, yummy and heats in minutes.  It’s just that their bottom line for profit is in conflict with our bottom line for…surviving. 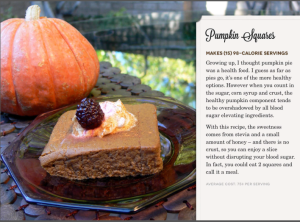 Sam: Maybe once a month I’ll drink a diet soda – as a treat, but I don’t think that artificial sweeteners are good for my brain . If I were to drink a regular soda without food it would spike my blood sugar.  Drinking a regular soda with a meal would be an option, except that the sugar and carbonation combo fills me up, and adding food to the mix just makes me miserable.  So for soda my preference is artificial.  For everything else I’d pick real sugar (not HFCS) over an artificial sweetener. My choice for a sweetener is Stevia.

Sam: I’ve never been of the opinion that eggs are bad and probably eat a least a dozen if not more each week.  As far as nutrition and price go, they’re one of the best foods on the planet.  There is a pop-up on eggs in my book.  When my local CSA’s hens are laying, I buy from her – they are the best.  My 2nd choice are eggs from pasture raised chickens.   (click image to enlarge) 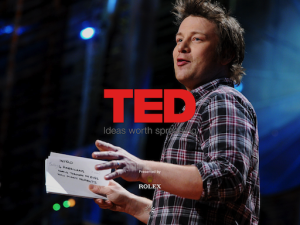 Sam’s Question for Henry:  Who’s Your Favorite TV Chef?   Although Jada and Sandra Lee are pretty and I loved Emmeril’s  “BAMs”  there’s a young non-descript British guy, Jamie Oliver, who utterly blows the doors off of everyone else, if you’re talking about doing some REAL good.   He’s funny.  He’s candid and he’s deadly serious.  His TED talk here is STELLAR!!!  The BEST!  If you do nothing else today, invest ten seconds and go to this link.  You just might save a kid…or yourself.   https://www.youtube.com/watch?v=jIwrV5e6fMY

Henry: What’s your take on Kefir?   We’ve been using it for about 6 months and Pamela is pretty much sold on it.  Any caveats?

Sam: I love Kefir and in fact Mike and I drink it almost every day.  No caveats that I know of unless you believe that dairy is poison.  I had a girlfriend tell me yesterday that she won’t drink anything that comes from a lactating cow.  I don’t argue with people when it comes to food.

Henry: Getting More Serious:   Seven Years ago, you ran into a life-challenge:  Could you tell us about it and, for the purposes of this article, how your diet affected your outcome?

Sam: I was diagnosed with Non-Hodgkin’s lymphoma and underwent both chemotherapy (the “Red Devil” included) and radiation treatments.  I give a lot of credit to my great doctor and the anti-nausea medications she prescribed, but  my diet was the key that allowed me to continue working and going to the gym.  Granted I was far from 100%, and there were a few days I didn’t want to get out of bed, but my brain was functioning well despite the horrible chemo-drugs.  Losing my hair sucked, but my main concern was the dreaded “chemo-brain” and for the most part, I think I did pretty darn well avoiding that, considering the circumstances.

Some Tips You May…or May Not Have Thought of:

Hershey’s unsweetened Cocoa  is one of the very best sources of Anti-Oxidants.  To that end, Pamela and I add a fraction of a teaspoon in every cup of coffee we drink.  Coffee tastes GREAT and anti-oxidants are the way to go.  No negatives…only pluses.  The Dutch, who drink about two cups of cocoa a day, have one of the lowest incidences of Alzheimer’s.

Cereal in a Box:  Rule of thumb:  If there’s a leprechaun on it or a vampire or a cute animal…or it’s made of milk chocolate, feed it to your garbage disposal.  It’s crap.  There are some reasonably good cereals and you really have to do your homework.

Charred Barbecue Food:  Once in a Blue Moon…  We’re not advocating that you join a foodie convent, but know where Scylla and Charybdis are.  That yummy black crunchy stuff that tastes so good will send you to the ICU section of the hospital.  Nothing in excess…

Hamburger:   It’s gotta be grass-fed and in MODERATION.  Once we eschewed normal hamburger, both Pamela’s and my aches and pains dropped by about 30%.

A little trick (from Henry):  My “kryptonite” is any ice cream that has little hunks of yummy things in it.  At 11 at night, I reach in the freezer and pull out the (they ain’t half gallons anymore) carton.  Next, I promise myself that I will stop eating once I can make all the little noogies of yummy stuff disappear.  …..That’s harder to do than you might think.  If you have a similar weakness, start buying portions…ice cream sandwiches, popsicles and one is your portion for the day.

If you read assiduously and clicked the (click here) buttons, you have an inkling how good this book is.  You can download it in a twinkling.  It’ll cost what you leave for a tip after an decent meal.  That “tip money” may save your ass.  Just go to http://www.brainfuelbook.com/ 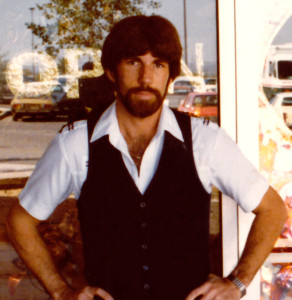 Yup…I’m in my sixties and thanks to my strict  diet of rutabagas and water…I look like this!!!!

15 Responses to "Are You Feeding Your Brain… or Starving It?"