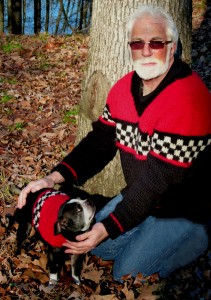 I had a young new guy working for us at the gallery.  Nice guy, played guitar, only one day he said that most of what he’d read in Shakespeare was a bunch of cliches.  At first I thought it was a really dry joke, only it wasn’t.  I tried to explain that most cliches are just old and wise sayings that have stood the test of time.  When Shakespeare wrote them…they were still pretty fresh.  I’m not sure whether he got the distinction or not.  When I was younger, I thought: Man’s best friend is his dog was a cliche.  It’s not.  It’s just really true and you have to have a good dog for awhile to realize it.

With the exception of my wife, Pamela, upon whom the sun rises and sets, you’re looking at my best friend.  His name…ahem…is Reginald Van Scooter the Fourth of CrossBow.  (That name is my fault.  The fourth part just sounded cool.)  He answers to “SCOOTIE!!!” and he’s the only one happy to sit with me day in, day out with the writing, sit there while we’re splitting wood…and one day he attacked a diesel locomotive that he thought was threatening me………and lived.  The photo you see is of Scootie and me in matching sweaters that Pamela made for us one Christmas.  Normally that would elicit a YUCK, but matching with Scootie is a high honor!