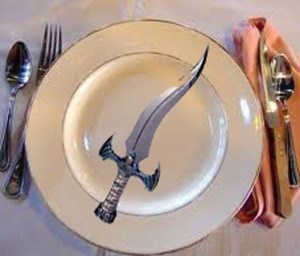 It was during the Vietnam War and I was sitting at a bar in Seoul, South Korea with my boss, Colonel Henry Jones.  Col. Jones had been one of the original Flying Tigers in WWII and I was a Vietnam-era pilot and Tempest officer.  Col. Jones was also a consummate gentleman and very observant.

After more than a couple of Korean beers, which always tasted like rusty nails, he decided to impart a morsel of wisdom to me.  He said, “Henry,” (We’re both Henrys, by the way) “Here’s a riddle for you.  Do you know who you really have to watch out for?”

Colonel Jones was not an obvious man so I knew that “The enemy” was not the answer he was looking for…nor did he make me wait.  “Generally speaking,” he went on, ” it’s not your boss, unless you really piss him off.  And it’s not your sergeants because they know that though they can screw you over, you can screw them right back…so it’s a stalemate.  The ones you really have to watch out for are your peers.  The reason is, you are both a yardstick and a mirror for them to view themselves.  You don’t have to worry too much if you’re a slacker or if you’re content to just go along.  But if you have ambition, you’re going to have to watch your back.”

Colonel Jones  sat back, smiled, and took a swig of beer. Then he rolled some dice in a leather cup and emptied it onto the bar to see who was paying for the round.  Being as I didn’t know the rules of the dice game, I lost…pretty much all the time, but it was worth it.

“Are you trying to tell me something?” I asked.  He smiled and then chuckled.  “No…I believe I did that already.”

The concept stuck in my brain like a cocklebur and stayed there…well…pretty much forever.  Low and behold, it’s true.  It was true in the military and true in civilian life, true in the art world and true in the literary world.  And though there are always exceptions, it’s safe to say that this is a major component of human nature.   Want to instantly quadruple the number of friends you have?  Have something terrible happen to you.  You’ll have more friends than you ever knew.  But have a bit of good luck, buy a really fancy car, and watch the equation go in the other direction.  Very few friends or relatives survive a terrible bout of good fortune.

A while back we went to dinner party of our peers.  It was, as they say, a mixed bag.  Some very close friends, some not so close and some who seemed loaded for bear from the moment they arrived.  Predictably it was a balance of men and women.  I think most of the major religions  were represented all the way from atheist, to agnostic,  a couple of Christians, Jews, and I think one of us might have been a heathen.

Of the men, several branches of the service were represented, and some who’d be hard-put to decipher what USAF, SAC, or TAC stood for.   A couple were retired, some still working, some already had all the answers and some seemed to know they’d never have answers.  Sitting down, I felt like I was either in an eight-sided chess game or…..in one of those psych experiments where everybody can either give an electric shock to the others or… a warm tasty appetizer.

As a writer, the texts, sub-texts, and sub-sub texts were fascinating.  Some chose the electric shock as their weapon of choice, some decided to hang tough with only the positive reinforcement.  And I kept thinking over and over, as the evening wore on, about Colonel Jones’ observations.  I have the horrible shrinking feeling that it’s that way in the retirement homes and nursing homes as well.  Does it have to be that way?????????

The party itself would make a decent short story…possibly a novella.  I’m thinking the title might be… Caveat Parium… Beware of Your Peers.