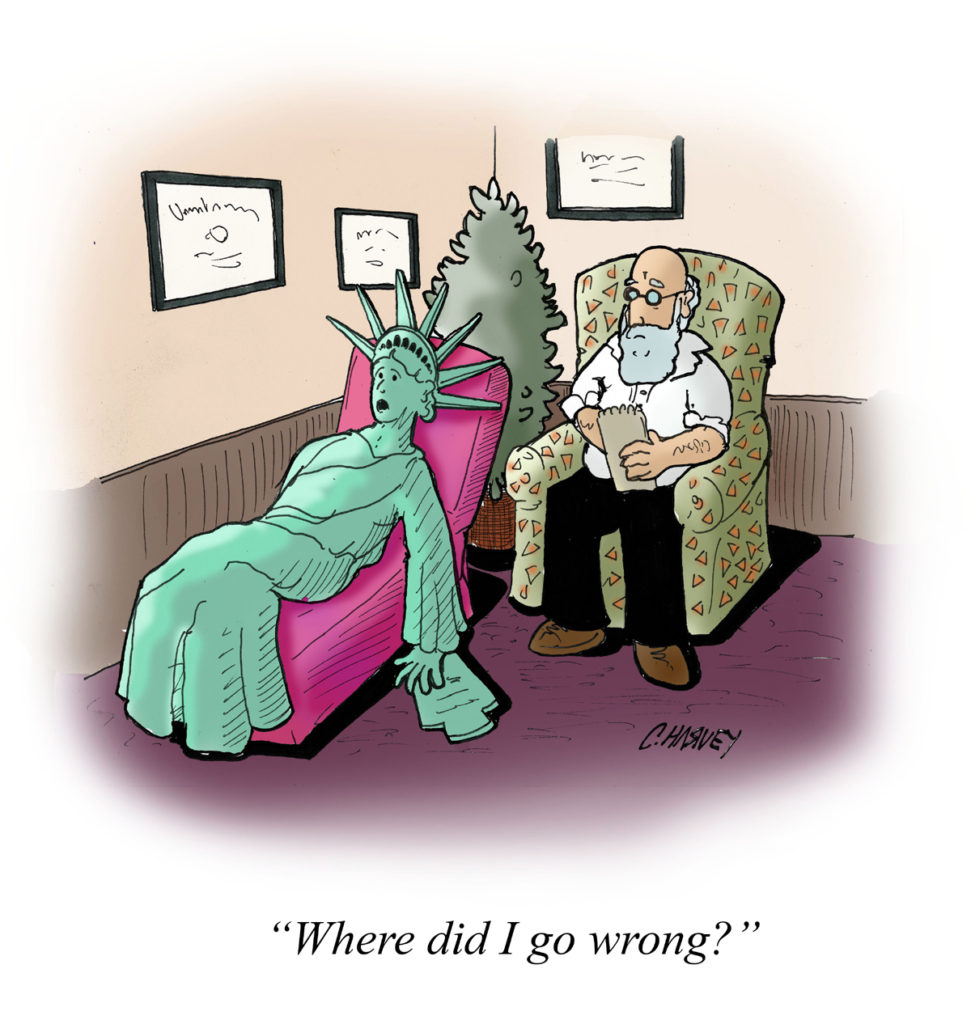 If it’s any consolation, no matter who you are, red or blue…black or white…yellow or brown, this has been a LOUSY year for EVERYBODY.  If nothing else, we have that in common.  …yaay…

Right after the election, at least half the country was sort of happy.  The country finally got a man who was not in the Democrats’ nor the GOP’s pocket and he was a Washington outsider.  That’s good for something!

And let’s get this out of the way as quickly as possible:  Mostly through tweets directly from the president, statements came flying out, often at three or four in the morning,  “I am the best president in history…possibly second to Lincoln or Roosevelt.  My words are the best words.  My speeches the best speeches.  Only I can solve the problem in the Middle East…I’ve been on the cover of Time more than anyone else,” and so on and so on.  Supporters of #45 were forced to sigh and change the subject.  When caught red-handed, a new term was created:  ALTERNATIVE FACTS which sounds better than LIES. 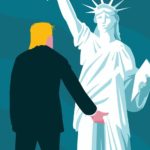 And things got worse.  For me, a biggie was the video tape of #45 bragging that now, in a position of power, he can get away with groping any woman he wants.  Well……not any woman.  If anyone groped Pamela, he’d have a bloody nose, and…the Secret Service would probably drag me away for it.  I ask you for one micro-second, can you imagine any of our 44 other presidents making such a statement?  I can’t.

GOP:  In the last few months, the GOP which grudgingly supported #45 during the campaign, began coming unglued.

Depending on what moment in time you choose, you would have been able to bet the farm that these loyal and high level members of the GOP would have supported their president:  Senator Mitch McConnell, Senator John McCain, Senator Ryan, the Speaker of the House, Senator Orin Hatch.  These gentlemen are the bedrock of the Republican Party.

The long list of GOP senators, congressmen and stalwart high-level Republicans  who have drawn a line in the sand, now extends into the 100s.  Why?  Take a moment and ask yourself why Mitch McConnell, one of the most staunch GOP senators in history, would turn away?  Or, either of our former GOP Bush presidents, or Mitt Romney or…the list goes on and on and on.  This essay is based on recorded, immutable facts about the Republican Party.  Put bluntly:  They ain’t happy.

TIPPING POINT:  In the past two weeks, however, something much, much more dire has developed.  No one could have seen it coming, not Mitch McConnell or Paul Ryan, or even Steve Bannon. 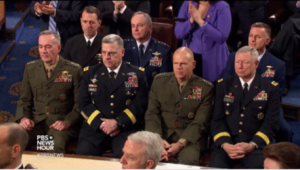 The Joint Chiefs of Staff:  Last week, during an impromptu speech that went out to the entire world, the President of the United states stated:  “North Korea will be met with fire and fury like the world has never seen.”

This is something you might say over a couple of beers down at the local watering hole. Threatening nuclear war by someone capable of launching one is the most serious threat on planet Earth.

If you know any of the specifics about thermonuclear warheads, it doesn’t take ten or twenty to completely mess up the atmosphere.  Fifty or sixty and we have a possible end to humanity.  America has thousands.  The JCS was not amused.  Japan, both Koreas, China, all of Europe, all of the rest of the planet was not in the least bit amused.  With the difference in cultures, countries cannot afford to act like TV cowboys. 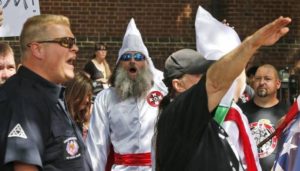 Strangely, even THIS was not the TIPPING POINT though it set Americans up for the next news cycle the following week.  Members of White Supremacist Organizations, KKK and Nazi Organizations, armed with rifles and dressed like policemen and military men, descended upon and took over Charlottesville, Virginia in a way that confused even the state police.   Violence broke out and soon the residents of Charlottesville began fighting back.   People were killed, including one woman who was an innocent bystander…all because the KKK and the Neo-Nazi groups didn’t like the prospect of a statue being taken down.

The tipping point occurred when President Donald Trump came out, saying that the blame was the same for everyone.  Quick question:   If you’re in your own home watching TV and a carload of armed Neo-Nazis pulled in your driveway threatening you and your family, are you in the wrong to protect your home…your family?

A sidebar, but one of the more bizarre moments in presidential history, was this:  During President Trump’s speech about terrorism and the murder of an innocent woman, he managed to put in a plug for his winery, which he said “is the biggest in America.”  Well, it isn’t the biggest…but the huge question is, “Is someone in their right mind plugging their personal winery during an attack on an American town??????????”

This bit of political infamy was met with a different kind of fury, one from essentially all of the GOP, the Democratic Party, the coalition CEOs from the largest corporations in America.  The CEOs have quit the Trump coalition and written condemnations of their own.

At least one thing seems to remain true about all the citizens of America:  They don’t want hate groups, terrorist groups, Nazi groups attempting to take over our country.  Mr. Trump, never one to back-up and regroup, hangs tough with his new friends, David Duke at the top of the list. 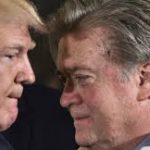 We were raised to be Americans.  But what does it mean?   As a little kid in about the third grade, we memorized the Pledge of Allegiance.  The words were new and powerful and the integrity came through loud and clear. 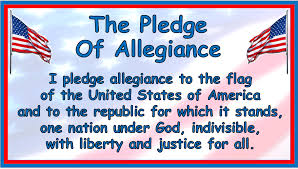 A few years later, we learned the first words of the Declaration of Independence.  They supported the Pledge of Allegiance…and went into a bit more depth.

A few years after that, we memorized the poem that greeted people wanting to come to a wonderful new land of Freedom for all.  The words were poetic, pure, and filled us with the wonder of what was and is America.

In grade school and high school, the term Melting Pot was used with extreme pride.  America isn’t just Irish Catholics.  It isn’t just Polish or German or English or Japanese people.  America is an amalgam of people wanting to live in freedom with a chance to be happy if they worked hard enough.

For the record, America was never just white.  Anyone who has studied even most basic of American history knows that.    America was actually, not white, but red first.  We clever colonists conned the Indians out of…well…everything.  And then everyone began coming over.  It worked then.  It works now.  And like everything else, on this tiny planet, countries morph.  They change.  They get better. 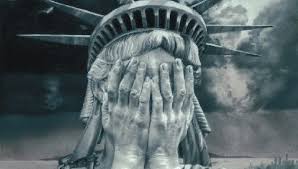 The Tipping Point threatens to take us back possibly a hundred years, maybe more.  America is first and foremost a country guaranteeing the rights of individuals…regardless of color, gender, politics, money.  That is what America is all about.  And the President of the United States is supposed to be our leader, spiritually and morally with the survival of our country is number one job.

AMERICA IS ALREADY GREAT AND ALWAYS HAS BEEN.  Let it continue to be great in the concept carefully drawn by our forefathers

P.S.  I’d like to thank my son Cameron, a professional cartoonist with innumerable American magazines, for bringing the cartoon at the beginning of the article to life.  For the record, Cam needed no cajoling for his excellent execution.

P.P.S.  Yes, I am highly aware that this is a highly-charged, potentially third-rail topic.  The things which truly make America great are the freedoms which this country has provided us.  I have served my country to the best of my ability and will always say what I believe.  We must all be able to do this or we cease to be American.  It’s your right to disagree.  But it’s your duty to tell the truth.