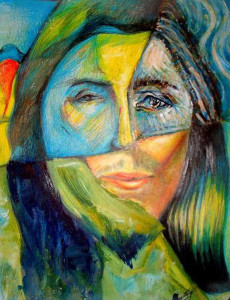 Been thinking about this one for a while now, possibly decades now that I come to think of it.  It’s about the masks we sometimes wear to get through life a bit easier and sometimes wear just to survive.

Pamela and I, close as we are, and as close as we’ve been for decades now, approach this solution to life from diametrically opposite directions.  It’s not an overstatement to say that, short of me, and sometimes our son Cameron, no one on the planet has any idea who Pamela is.  Having said that, she doesn’t put on any false fronts whatsoever.  She is quite simply an    extremely private person.  Her usual tool or mask is that of deflection.  When asked a too-personal question, she’ll grin, twinkle, think for a moment and adroitly turn the question back on the questioner.  This almost always works.  Seems like 99% of the world essentially is just waiting for a chance to talk about themselves.   And…it’s not my job, nor my mission to “out” Pamela of some of her accomplishments you don’t know about.  She’s the absolute best example of an honorable human being I’ve ever met.  She’s just….really private and quite happy that way.

I, on the other hand, seem to approach survival from the polar opposite of privacy.  The running joke between my son, Cameron and Pamela is that by the end of 20 minutes meeting me, I will have (with utter self-deprecation) let it slip out here and there…pretty much everything I’m proud of.  The only redeeming thing about this bravado is that it’s delivered on a large Kaiser roll of candor.

Early on I learned that the only non-nauseating way to toot one’s own horn is to do it by prefacing it with some lousy, inarticulate, dumb, idiotic thing I’ve also done.  A typical example:  “I was so lousy in baseball, I’d get right field and stand so far out that I’d never have to actually catch a fly ball.  Kinda weird that I’d be able to pilot a jet fighter at 500 mph.”  Both true statements, but you can see how there’s a kind of, “Oh gosh, I’m lousy at softball, but…”   And I can do that till the cows come home.  Truth is, I have done a bunch of stuff in my life and I’m proud of it.  The truth behind the truth, however, is that not one single thing I do or have done, accounts for anything when I get up each morning.  My son seems to have that gene as well.  We’re both like sharks in that regard.  If we’re not moving forward…constantly, we’re sinking.  Sometimes gradually.  Sometimes rocketing downward.  It all has to do with self-image. 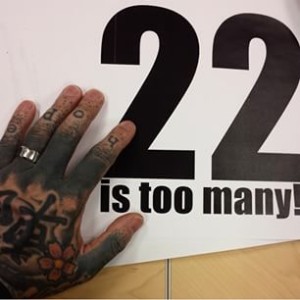 SELF- IMAGE  sounds like something teenagers worry about while examining their zits in the bathroom mirror.  It goes drastically deeper and drastically more serious than that.  Brace yourself.  We’re going dark.

Let’s take a look at our military veterans.  More veterans die in their homes every day than die on combat missions.  Twenty Two veterans die every single day in their own homes as a result of suicide.  If you don’t have a loved one in the military, you might be inclined to shrug it off and sigh, “Gee, what a terrible shame.”  If it’s your mom or your dad, sister or brother, you very well might be calling your state senator, screaming, “What the Hell is going on?”  You wouldn’t be alone.  In fact, if the idea of that many of our own giving themselves personal death sentences sounds completely unacceptable, you might consider tapping 13 buttons on your keyboard to see what’s going on.  Those thirteen taps equal:  Mission 22.com . 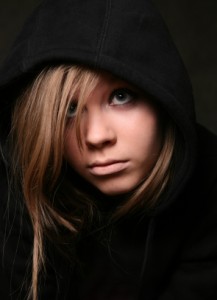 Self-Images of Our Children:   Some hard and difficult to accept stats on how our children are doing:

Suicide is the second leading cause of death for ages 10-24.

Every day….every damned day, there’s an average of 5,400 attempts by young people (grades 7-12) to terminate their own lives.  Let that one sink in for a moment.  Think of a room filled with over 5000 of our kids and each day another 5000+ try to kill themselves.  Something is wrong, hideously wrong.

And…it’s not just our soldiers and our kids.  We, as Americans successfully commit suicide at the rate of about 30,000 a year.  I said, successfully.  Would you care to guess how many Americans attempt to end their own lives every year?  Roughly 750,000.

Counting friends, associates, family, and myself, I know close to a dozen who have fought the dark shadow-monster of depression, some for brief periods, once in a while, and for some that monster is always waiting in the wings, looking for an opportunity.  Several of my friends have succumbed to this and I’ve always been amazed at the spectrum of responses.  Many friends and relatives of those who succumb, go directly to anger rather than sorrow, which always seems strange to me.  If a fellow creature on this tiny planet is so miserable or in so much pain that death seems the better alternative, it’s a time for sorrow, not anger.   I’ve always wondered about those people.

On the other hand, when you see someone who is in deep depression or has some terrible self-image that their life seems hopeless, how do you handle it???   We, as a people, are taught many things in school, by our families and by our peers.  We learn to drive fast in traffic, text, have a cup of coffee and switch around between stations…all at the same time. 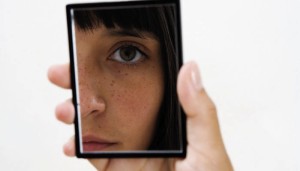 Yet we seemed ill-equipped to walk over to a mirror and see ourselves as viable creatures on this planet.  There’s an excellent poem/superb and succinct philosophy of life that I refer to sometimes.  It’s called, Desiderata, and if there were one message in a bottle I’d want to leave to my kid, my family, my buddies, it would be that poem.  It works on every level.  One of the many lines states simply:  “You are a Child of the Universe, no less than the trees and the stars…you have a right to be here.”   The simple concept: “You have a right to be here,” is the one that is lost to 22 military veterans a day,  5400 young people..a day, 750,000 Americans a year.  In their minds, that concept doesn’t compute. 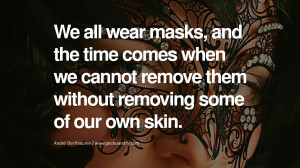 Invisible Masks and Our Invisible Armor Plating:  We, as a species, have perfected the fine art of appearing to be much different than we are.  Some bugs and birds and reptiles and fuzzy animals can puff themselves up when attacked or when they are horny.  We have honed that concept to a fine and nuanced art.  Our teenage girls see images of models on their cell-phones, computers, TV screens and think that THAT is reality.  It isn’t.  Images are taken, then photoshopped, stretched, imperfections erased, fat excised and with perfect lighting and 200 shots taken, that is what they perceive as reality.  Taylor Swift and Miley Cyrus for example are not reality, though that’s what our teenage girls are fed and what they feed themselves.  It’s a bad and potentially lethal diet.

The Artifice is Everywhere.  In Bucks County, PA, where I live, the most common car on the road is a BMW with Audis and Mercedes a close second and third.  Is it because all Bucks County people need to be able to accelerate 0-60 in under six seconds?  No.  It’s all image, all status, all…bullshit.  I’m picking on Bucks County because, well, that’s where I live at the moment.  Half the houses are a million dollars or more, some five, ten, 12+ million dollars, with enough rooms to beautifully accommodate a complete basketball team.  My friend, Al, a UPS driver, delivers to these houses every day.  Walk inside and half of them echo because they’re empty of extra furniture or carpeting.  It’s all for show.  And then, somewhere along the line, someone goes out to the garage, starts their Beemer and leaves the garage door closed.  They snookered everyone else and then they finally snookered themselves.   They just couldn’t keep it up.  Another line from Desiderata:   “If you compare yourself to others, you may become vain and bitter, for always there will be greater and lesser persons than yourself.”   https://www.youtube.com/watch?v=PNq_DTmVCWs 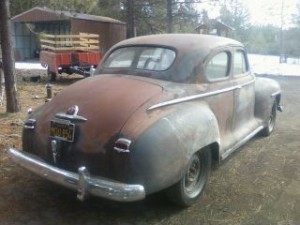 An Alternate Route on a Very Small Scale:  Recently, I’ve begun trying a different tactic when I meet with friends or get invited to the proverbial cocktail party or dinner party…from hell.  You might try it.  You’ll be surprised with the results.   When the topic comes to “STUFF,”  a term which I’ve come to really dislike, I go in the other direction.  Typical guy discussion:  The Tesla vs. the new M-5 BMW, etc. etc. etc.   I now jump in with a challenge:  “Let’s talk about the first car you ever bought, not the most expensive or the sexiest.”  (My first car was a ’46 Plymouth…a Sherman tank of a car.  No reverse or second gear…you learned to park strategically and it cost $40.00 from mowing lawns.)  With that sentence, smiles begin appearing on faces and I begin to hear about 72 Pintos with no side door, etc.

Another example, instead of comparing acreages and Zillow prices of our houses, I kick off with, “My first house cost…  (a little drum-roll) $18,000.  It was a brick shoebox on about a millionth of an acre.  I was a second lieutenant…and it was GREAT!  Truly GREAT!  With two sentences, the artifice, the baloney, the bullshit falls away like so much invisible baggage and strangely, much more powerful friendships begin to blossom.   It isn’t limited to cars and houses.  It’s infectious.  I love to chide my old roomie from college, now a man of hugely discriminating tastes with regard to wine, about the slop we drank in college and when we were both first married.  Spañada (jugs and possibly 55-gallon drums), Annie Green Springs,  Boone’s Farm!!! and Coors Lite Beer (It was so wussy, Pam used to stir in a packet of cherry Koolaid to give it a more nuanced taste and bright red color).  I gnash my teeth thinking about this.

Yeah, I can hold my own with the bullshit conversations…and win.  But it’s a helluva lot more fun and interesting, going in the other direction.  Everyone goes home happy.  No one has to sit out in the garage, alone in their BMW.

Take off the masks.  Drop away some of that heavy armor-plating.  And……not to beat a dead horse, but there’s a place about 10 hours south of us in Asheville, NC, where the whole town has apparently already learned what I’m still learning.  It ain’t the stuff.  It’s the people and actually getting to know each other.  Lookin’ to get an old old pick-up truck…Chevy, maybe 1950,  see if they still sell truly crap wine and go trout fishing ,panning for gold, playing grab-ass with Pam and tickling my pups.

If any of this strikes a nerve, take a look at Desiderata.  Oh, and a little movie entitled  Happy.  It’s on Netflix.  If you haven’t seen one or the other, you’re in for a treat. 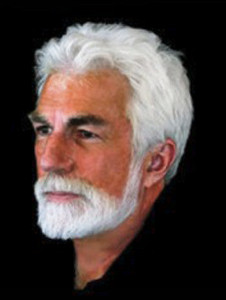 6 Responses to "Self-Image and The Masks We Wear"