I only really learned the term in 1992 when Buckingham Palace caught fire. Afterwards, the Queen did an interview, declaring ’92 to be her Terrible Year…her Annus Horribilis.   I believe our son was about 18 then, and in typical teenage-fashion, he said  “The Queen has a horrible ass?”  “Maybe,” I replied, “but she may have meant something else.” 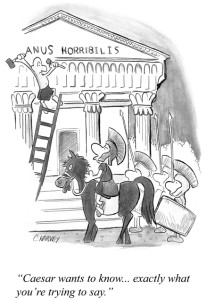 Many years later, and at my request, this cartoon  appears before you.  I’ll tell you about its derivation later, though, yes, this is my son’s artistry.  Among other things, father, son, husband, and metal sculptor, he is a cartoonist with  The New Yorker Magazine.

Returning to the Annus:  I have this sinking feeling that everyone, rich or poor, famous or infamous, has an  annus horribilis at some point in their lives.    The big trick is not to let it morph into a Vita Horribilis, a horrible rest of your life.  There are ways to steer clear of this.  We’re steering even as I type…

Before it happens, no one who walks on this planet can prepare for such a thing.  A family member dies, or gets seriously ill, or is injured.  Your spouse walks up to you with a big surprise, “Guess who I just met with…an attorney,” or “You know that cute UPS guy?” or, in the case of one of Pam’s college girlfriends, one day you have a luxurious house at the shore…next day you don’t.

I can tell you the exact second our annus horribilis (AH) began.  I was mowing the final swath of our front lawn with the John Deere and Pamela came out, with a sweat shirt tied around her waist…strange for her.  I cut power and as I did I noticed the blood running down her leg.  I said, “What happened?” and she said, “We gotta get to the emergency room.”

I promise you:  I am not going to drown you with a year of  horror stories regarding cancer treatments and then some of the huge surprises that rival the cancer.  Truth is, I really don’t want to go there either.  What’s more  important is watching and learning how people react when the inevitable occurs.  There are times to stand, brave and tall, and there are times to duck and cover.  For those of you who’ve already had an AH, you understand the truth of it.  For those who haven’t…a couple of tips.

First Observation:  Every doctor on the planet has been counseled in the same technique: Never, under any circumstances do you give the patient the whole truth the first day, possibly first week or month.   Like  most guys, I was completely certain that what I needed to know was the truth…and right now.   That is, I believe, a lie that we tell ourselves.  What we really mean is, “I can’t stand what I’m hearing.  Tell me the truth and by that, I mean, tell me that everything is going to be fine.”  Sometimes it isn’t.  The brain is a marvel at adapting to things, but terrible information can sink you before you’ve even begun to fight.  As painful as it may seem, do not demand to hear the whole story.  It’s a mistake.  To paraphrase Jack Nicholson, we can’t always handle the truth.

Moving Quickly:  Sometimes a wait-and-see approach works best.  Other times, as with Pamela,  minutes, hours, and days count.  After Pam’s first surgery with the DaVinci machine, the surgeon marveled at how quickly we cut through red tape.  He confessed that the outcome would have been very different had we not done so.  A chilling observation.

Choosing your hospital and your surgeon:  The facade means nothing and the fact that your neighbor had her gall bladder removed means little.  This is the most important decision you’ll make:  Use the internet…wisely and triangulate.  Fairly quickly one name will begin repeating.  Silver hair means nothing, race means nothing.  Culture means nothing.  None of that means anything at all.   You want to know how many surgeries like yours they’ve performed…this month and what their success rate is.

Not all AHs involve a trip to the hospital:  Here are a handful of candidates that can stress you beyond your emotional limits:   Divorce, Loss of Job, Death of someone close to you,  Change of location,  An affliction requiring life-changing physical care, sickness or loss of your child, chronic pain, abuse, being sued, victim of a crime…terminal illness, and this list goes on and on.  Pamela did a little quick count:  This year we have four of these candidates, all going at the same time.  It makes things a bit stressful.

The Trinity:  Family, Friends and Religion:  Failing any of the three…a support group can save you.  To be candid, when things go to hell, you find out very quickly who your true friends are and strangely, it’s not always who you’re expecting.  Sometimes a true friend might be going through their own AH and they’re just trying to keep their head above water.  Sometimes…there are different reasons.  It’s the same thing with family:  Like everyone else on the planet, some are better than others.  I’m always amazed and a bit envious when I hear of family get-togethers where the family members measure in the hundreds.  My mind just doesn’t compute.  Our family is tiny by comparison, but when the chips are down, impenetrable.  You don’t really need a cast of thousands, or hundreds.  You really need a person or two who can watch your back through everything…the gory, the depressing, the long-term. 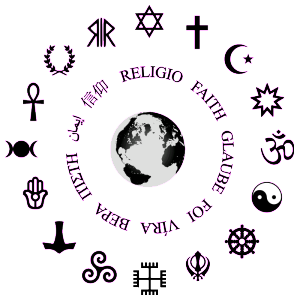 Religion:  Not going into any depth on this one, mostly because there are over 4000 religions on planet Earth as of this morning and a bit more than seven billion people occupying those 4000 religions…each one  absolutely certain that theirs is the only one, and often highly insulted that you could even think there are any others.  Not going to go there.  Instead, I’m speaking strictly of the emotional and psychological benefits that any religion provides, real or not.

If I could wave a magic wand and make any person with a terminal illness believe that their lives are very soon going to culminate in an eternity of bliss, I would do so in a second.  What a kind thing to do, to believe that you or one of your loved ones will be in for eternal bliss.  Here is a time and a place where belief in a wondrous hereafter is the kindest and most loving salve of all. 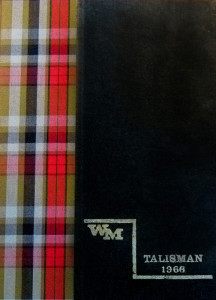 Reality Check:  I look at my friends and I often get the  classmates.com updates on my iPad and it’s not difficult to connect the dots.  The serious illnesses are increasing, the deaths, and it’s a bit like listening to popcorn pop.  The tempo starts off slow and accelerates, culminating in a frenzy of sound…followed by silence.

Whatever you conceive to happen after that silence is one’s own personal business.  While you’re on this planet and in this realm, however, live each day with new eyes.  Look at your loved ones and appreciate them.  Tell them how you feel.  In whatever religious realm you exist, truly enjoy the feelings that you have for your distant future.  But right now, all you have is now.  Enjoy it all……………but be prepared to duck. 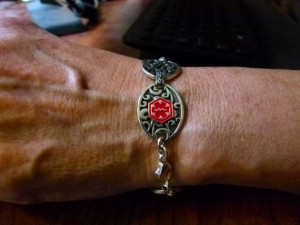 Pam’s and my  Annus Horribilis continues.   She’s wearing some new jewelry now.  Most of you will get it.  It’s been rough on both of us, only in strangely different ways.  It’s a different world now.  I think the vodka martinis have gotten a bit stronger than before.  Sometimes, that’s actually a good thing.  We’ve been really close now for over 45 years.  Now…we’re even closer.  Didn’t think that was possible. 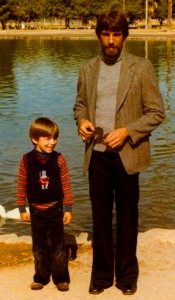 P.S.  Henry and Cameron…a handful of years ago.

Cliche or not, this image is about how I’d come to think of myself.  I was never once happy with the way I looked…never.  Needless to say, things haven’t improved in that regard.  But that little blond munchkin standing next to me is bigger than I am, is a killer fencer, a good dad and husband…and of course, a big pain in the ass at the studio sometimes.  And that little munchkin is acquiring a formidable collection of New Yorker cartoons.  Look for a book one of these days. HRH