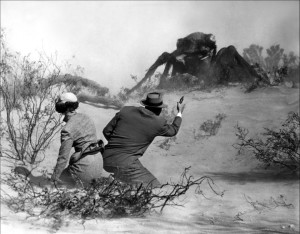 Scene from THEM!!! (Giant Ants)

Pamela and I agree ad nauseam on almost everything...except when it comes to science fiction.  I remain in constant amazement that Pamela (and apparently half the women on the planet) merely put-up with sci fi rather than savoring it.  This morning while floating around in the hot tub, we finally had…The CONVERSATION:

“Okay, Pamela, please explain it to me once and for all.  WHY don’t women like sci fi?”

“Could you be a little more specific?”

My feeble attempt at a comeback boiled down to:  “But, I remember.  You said you liked  War of the Worlds.”  Pamela waggled her hand.   “Uhmmm…  That one was okay, mostly because Gene Barry was in it.”

“Okay, I get it.  But you also liked that first new Star Trek a lot.  You admitted it.  You liked it.”

I was beginning to see a pattern!  It’s very possible that 51% of this readership is now reaching for their Nice Asses of 2015 App. 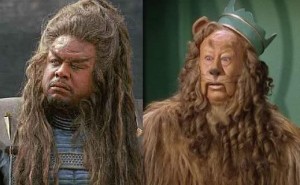 Battlefield Earth:  (Rotten Tomatoes gave this film one star.) Roger Ebert  (I’ve never seen this before:  Half of one star).  Quoting Ebert:  “This movie is like taking a bus trip with someone who has needed a bath for a long time.  This movie is awful in so many different ways.”  Guess who wrote the book for this one.  C’mon, don’t be shy.  L. Ron Hubbard who also dreamed up Scientology.  Also, John Travolta stars. I rest my case.  Wondering where the costume department got their inspiration from?  Look above.

Santa Claus Conquers the Martians:   Yes, this is a real movie, and no, you don’t need an excuse to not watch it.  It’s so lousy, I’m not even going to put up a picture.  Use your imagination. 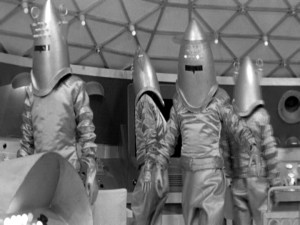 Invasion of the Neptune Men:  Well, if we’re going by stars, this one got half the number of stars as Battlefield Earth…a perfect Zero!  It’s made in Japan, but c’mon, that shouldn’t deter you.  Remember Mothra (giant moth for those who can’t connect the dots) vs. Godzilla (giant lizard).  Lizards eat moths.  Neptune Men…  Look at the image.  Did you ever wonder where Lorne Michaels got the idea for the Coneheads on SNL?  You read it here first, folks.

Alien III:  This is the only movie where toward the end, I was rooting for the monster.  Every good guy gets killed off in the first 30 minutes.  Afterwards…who cares? 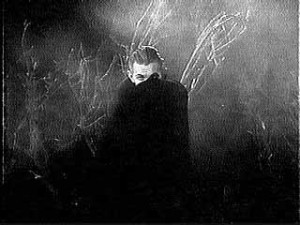 Plan 9 from Outer Space:  If you don’t know the back-story on this one…well…you will in a minute!  Ed Wood produced and directed it.  Ed Wood of, “Gee, it’s getting late.  That’s a wrap” fame.  Budget?   We don’t need no budget.  Bela Lugosi, the lead in the movie, died in the middle of filming.  Sooo…they plugged in someone, possibly the guy who delivered donuts, to walk around with a cape over his nose for the rest of the movie.  It’s so incredibly terrible it’s a must-see! 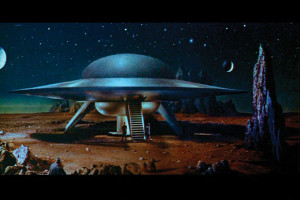 Great Sci Fi Movies of the 50s.   My candidate for all-time winner of any sci fi movie  has to be Forbidden Planet.  Big points for the good guys (us) piloting our own flying saucer.  The screen writers wisely stole the plot from Shakespeare’s Tempest.  The “monsters” were invisible which for me as a little kid just scared the crap out of me.  When I went home, I peered in my bedroom and thought, “Okay, where the hell are you?”   The Krell culture seriously fascinated me.  With their technology they could conjure up whatever they could think of.  Too bad they forgot that it could also conjure up whatever the Krell dreamed of.  Good concept and appropriate today.  Should we create everything that we can conjure up???????

In the self-aggrandizing FWIW department, I’ve just finished writing a sequel to this movie.   Working Title: Monsters of the Id.   It picks up 50 years after we thought we blew Altair IV into nano pieces.  FWIW, a good sci fi movie should have the following: An original monster, one you never even thought of.  A plot that keeps you off-balance throughout.  Characters you really care about. (This is where 90% of movies lose us),  and good dialogue.  Monsters of the Id has those qualities plus the obligatory 7 blow-you-away scenes. Guaranteed on that last one. 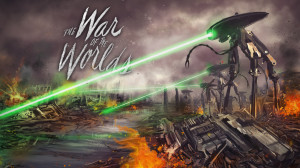 War of the Worlds:  There have been over ten movie versions of Wells’ book, plus numerous TV and radio versions.  You only need to know two, the 1953 version and the 2005 version.  1953 version: kick-ass flying space machine, superb and appropriate ending.   2005 version, also a kick-ass machine, on three legs, super special effects, good acting by Dakota Fanning and Tom Cruise…until the whole thing collapses into a giant “HUH???” at the end.  Maybe Spielberg went on vacation toward the end, thinking they couldn’t screw it up?  He would be wrong.  Both well-worth seeing though.  Just close your eyes and put your fingers in your ears for the last ten minutes of the new one. 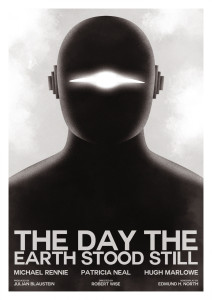 The Day the Earth Stood Still:   Smart movie, despite the ever-popular heat rays that disintegrate soldiers, tanks and howitzers with the flick of a switch.  Michael Rennie and his huge non-verbal robot side-kick ruled.  But it was a post war cautionary tale, mostly about the atomic bomb.  It’s still great.  Humane tip:  Do not under any circumstances watch the remake with Keenau Reeves.  The Robot is more human. 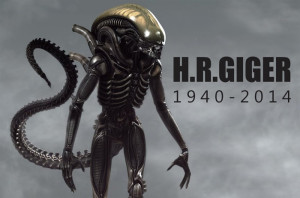 Alien…Aliens:  If you measure the quality of a sci fi movie by how many nightmares you have afterwards, these two take the cake.  Brilliant, lethal, claustrophobic and forever after copied by almost every sci fi movie.  You can thank H.R. Giger, Swiss Impressionist painter and, most likely, one sick dude.  Alien was the purest of the two… a perfect 10.  But Aliens had more going on and more sub-plot dynamics.  You can’t be a sci-fi aficionado without viewing these two. 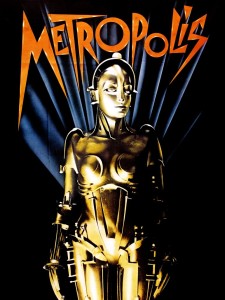 Robot Movies:  Fritz Lang’s Metropolis, created in 1927,  holds up surprisingly well, particularly when you couple it with its new rock music.  Also, a big nod to Robby the Robot in Forbidden Planet, The Terminator and I Robot.

And most recently, Ex Machina, which just came out.  My advice:  Wait, and watch it on Netflix . Pour yourself a cup to stay awake.  Not that it’s bad, it’s just boring…and predictable as hell.  Bad guys have dark hair. Blonds are victims.    The only  interesting scene is on the trailer.   Kyoko, an oriental robot dances a bit provocatively.  That’s about it.  If you want to see a good AI movie…right now, watch the cleverly named, AI.    Better yet, watch Eva, which is better than Ex’   though little known in America.

Eva:  Eva came out with the same concept only earlier by about 3 years.  Excellent and thoughtful special effects that are done the right way…not showcased, just part of the fabric.  Solid acting, superb illustration of a way that AI brains will be made, and an ending that’s touching and scary at the same time.   BTW, in Ex Machina, guess what they named their robot.  Ava.  Ooops….. 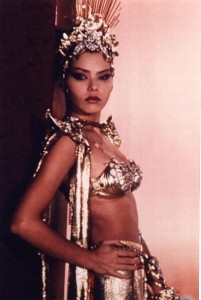 Flash Gordon (1980):  I’m embarrassed to admit I’ve seen this four times.  If you like really gorgeous girls (Ornella Muti, Melody Anderson, Mariangela Melato) in terrific costumes, give it a shot.  Good music, super-campy dialogue…and the image on the left…is of one of the bad guys!  Space ships go approx. 28 mph, so it’s not hard keeping up with the action. 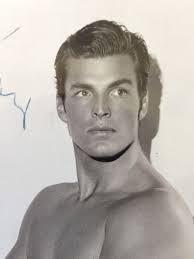 Speaking of which… the original Flash Gordon 1936-40 television series with Buster Crabbe, is hot…and a hoot!  The tailpipes spew out sparks and smoke and sound like bacon frying.  You knew when the Clay People were around (mostly in caves) by a weird little funky tune on what sounded like a xylophone…and King Ming (Charles Middleton (39)and Max Von Sydow (80) were absolutely the best bad guys you could ask for.

Just re-watched the latest version of Godzilla, cleverly renamed…Godzilla.  Well, the times, they have changed.  Godzilla got a whole lot BIGGER!  This one could yank one of our aircraft carriers out of the ocean and smoke it like a cigar.  If you’ve ever taken general science in high school, it’s just too damn big.  Laws of Physics and all that.

The Thing:  Old vs. New.  Loved ’em both.  In the 1951 version James Arness (Matt Dillon…Gunsmoke) played The Thing and looked like a six-foot six lumbering carrot.  The Thing: 1982 version:  VERY scary.  Very claustrophobic.  Good concepts well-executed. Excellent special effects.   Hate to admit it but this one kicks the ass of the first.  If you missed this one, it’s a must-see for sci-fi buffs.

Invasion of the Body Snatchers:   1956 version:  Starred Kevin McCarthy and the beautiful Dana Wynter.  Beautiful execution.  You don’t miss a thing from the lack of special effects.  In the end…there’s hope.

Invasion of the Body Snatchers: 1978 version.   Donald Sutherland, Brooke Adams.  Well…it’s in color, if that makes a difference, and the special effects are a bit better.  Comes the end of the movie, there’s a scene…  You hear bagpipes playing Amazing Grace, though you thought all was lost.  You sigh in relief.  Whew, almost lost humanity.  Ooops.  It was just a radio that was left on.  You come away pretty bummed-out.  Your call.  Do you enjoy getting bummed-out?  Still, they’re both must-see movies for a serious sci-fi aficionado.

Honorable Mention B Twinkies:  District 9 …nauseatingly good monsters.  Pop a Rolaids as they roll the credits.

Pacific Rim:  Robot Transformers vs. Godzilla.  Good special effects, but no concern for any Laws of Physics or Logic whatsoever.

Tremors:  CAMP!!! with a capital C.  Scary, funny, they spent all their budget on a good monster and Kevin Bacon’s paycheck.  Good choice!  Line to watch for:  “Guess they broke into the wrong rec. room.”  Watched it three times.  Could easily watch it again.  Nice concepts.

Invasion from Mars:  This one had two versions.  First one is pure 1950s, B&W but really good nostalgia.  Modern version well worth a watch, though neither are great.

No, I didn’t forget the multitudinous Star Wars or Star Trek Movies.  Saw em all. Except for the Phantom Menace which I give a half-star, they’re all shades of okay to pretty not-too-bad.  But you’ve already seen em all.

If you’re of the superior, savvier, sexier, softer, curvier gender, thanks for wading through.  Real men eat meat, can throw a football, kill that spider in the back of your closet…and watch crappy ole sci-fi. 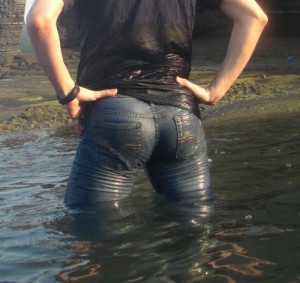 P.S.  It’s no secret that I fly drones.  Here’s a five minute video using the DJI technology I use.  It’s called Lifted…  It’s good.  First time I watched, it bit me a little.  Second time…blew me away.  In five minutes they managed to accomplish more than two hours of watching Ex Machina.  See for yourself.  If you’re a daddy, watch it twice.   http://www.dji.com/showcase/16720

P.P.S.  All good sci-fi discussion follows a single format:  “You say you like “X”?  Are you crazy?  “Y” is much better!”.  Let me know your BEST/WORST nominations and I’ll post ’em.

12 Responses to "Amazingly Awful Sci Fi Movies + Some Yummy Ones"